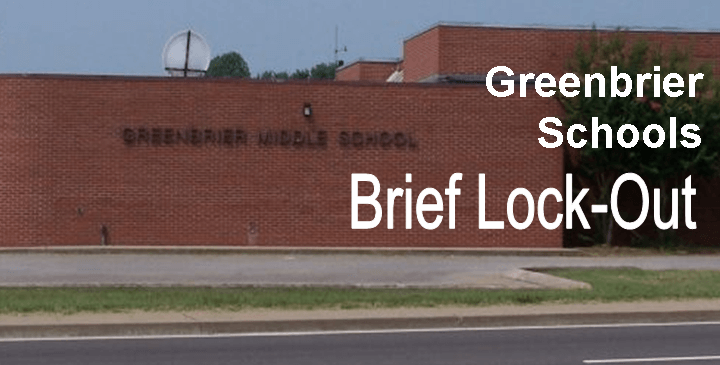 Acting under the advisement of local police authorities, all Greenbrier schools were placed on Lock-Out today.  This began at approximately 11:15.  During this time, school operated normally; however, anyone trying to enter the building went through a screening process.

The Lock-Out was lifted by authorities at 12:30 once the situation was determined to be safe.We will post more details as we get them

UPDATE: A man from Greenbrier visiting the Dept. of Human Services this morning had told an employee that he had “Sandy Hook” Tendencies. After the man left, the employee informed authorities.  According to Greenbrier Fire Chief Billy Wilson officials  decided to err on the side of safety and lock-“OUT” the schools in Greenbrier until they could investigate.

School Official Jim Bellis tells Smokey Barn News that Ridgetop Schools were also included in the Lock-Out as a safety precaution. As we understand it the Ridgetop police chief upon hearing what had happened decided to err on the side of safety and lock down their schools as well.