Alcohol (beer) On The Square In Springfield Passes Five To Two 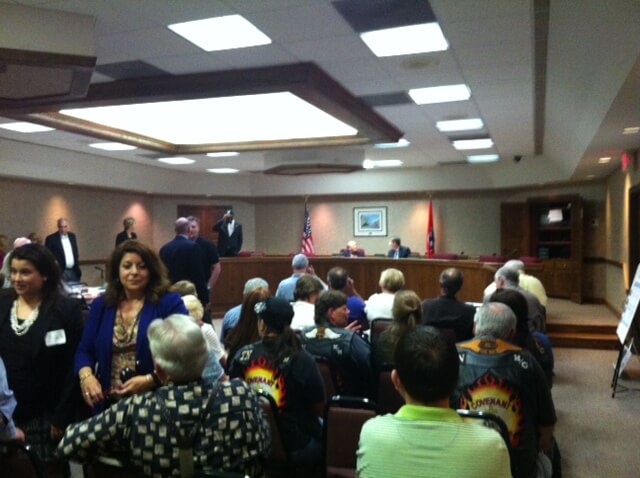 So I know you thought we did this already a few weeks ago, apparently that was a trial run. Today in Springfield’s city meeting a new idea was presented. As you may recall it was just some weeks ago that the Springfield city leaders voted to reduce the distance restaurants had to be from churches and schools (around the square) if they were going to sell alcohol. Years ago that distance was 250 feet and at some point was upped to 300 feet. A few weeks ago it was lowered back to 250 feet just for the Springfield square and 300 feet for the rest of the city. Unfortunately that turned out not to help the square much once they got out the  measuring tape .

Well now city leaders have approved a new plan.  This one would allow alcohol to be offered in restaurants directly adjacent to the Robertson County courthouse with a new distance of just 100 feet from churches and schools. That 100 feet is only for existing churches, not new ones that spring up later. The zone of freedom covers any building facing the Courthouse and over to 7th Ave off Main and back around to 5th Ave. from Locust St as long as the restaurant is at least 100 feet from a church or school. The rest of the city of Springfield was upped again from 250 feet back to 300 feet.

The push for booze comes from the belief that offering it will revitalize the square in Springfield. Restaurants have been afraid of the Springfield square because they cant offer alcohol.

At any rate, it looks like alcohol has finally made its way back to the square since it was banned back in 1909. Only time will tell if it has the desired affect.

All those that want alcohol on the square are actually after the revitalization of the historic downtown area. About 7 people spoke at the meeting this evening. Business owners around the square, some for and some against  presented their cases. Three people urged the board not to make a decision tonight. They felt an advisory board should be set up to look at all the alternatives to revitalize the square other than just alcohol. It seemed to have little effect, the ordinance was approved on second reading by the Springfield Board of Mayor and Aldermen with a five to two vote.

Final reading of the ordinance will be in June.

So there you have it Robertson County, the Springfield square is heading into yet another phase of its interesting two hundred year history.