Christina Hanshew has been found safe in Dandridge, TN according to her mother Angela Hanshew. Dandridge in about 4 hours East of Springfield.

According to her mother Angela , Christina is now in police custody and she is in good shape. Angela is on her way to get her.

Angela wanted to convey to the community that she is very grateful to everyone that shared her story and assisted with the search efforts. The first search rally to find Christina  was scheduled to be held Saturday morning.

The plan was to meet at the parking lot next to Waffle House in Springfield and flyers would be handed out to be distributed. Christina was found safe minutes before the rally was set to begin. The rally was called off.

SPRINGFIELD TENNESSEE (Smokey Barn News) Christina Hanshew age 14 of has been missing  since07/15/2015, at 3:30 am, at her family residence in Springfield, TN.  She has blonde/brown hair, blue eyes and is 5ft  3in and approximately 160 pounds. It is believed that she had been talking on line to older men, not only in TN, but also in other states, and that she may have left with one of these subjects she met on line….

Smokey spoke to Christina’s mother Angela Hanshew Friday evening. She told us she is heartsick and worried about her daughter. We asked her if she had a message for her daughter; “Christina, your mom loves you, please come home. I can not sleep another night without you. You won’t be in trouble, you wont, I just want you home baby-girl, I need you home, I love you.”

If you would like to assist in the search for Christina, a group will be meeting at in the Big-Lots parking lot next to Waffle House in Springfield Saturday morning at 11 o’clock. “We are going door to door, we’re going to pass out flyers, we’re going to look for my daughter,” Angela told Smokey Barn News Friday evening. 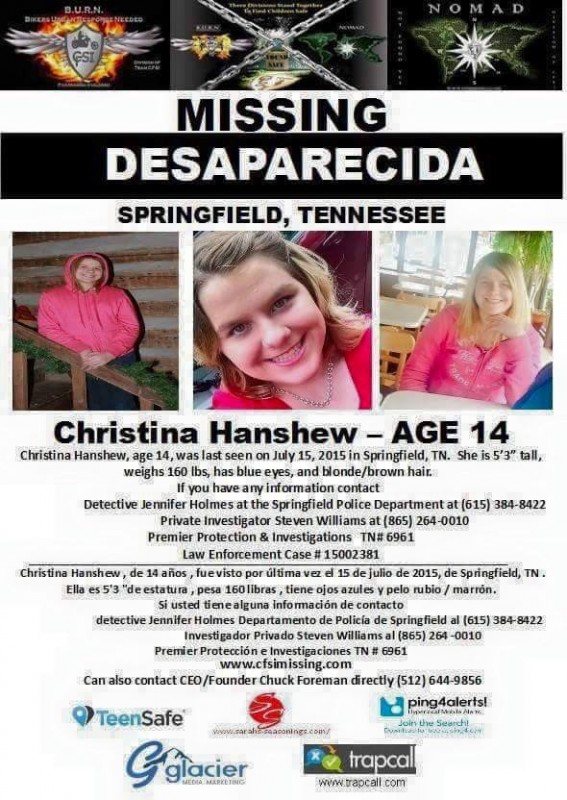