According to a CVS representative, only the pharmacy part of the business has been acquired. If you have active prescriptions, CVS has your files and they are ready to serve you. 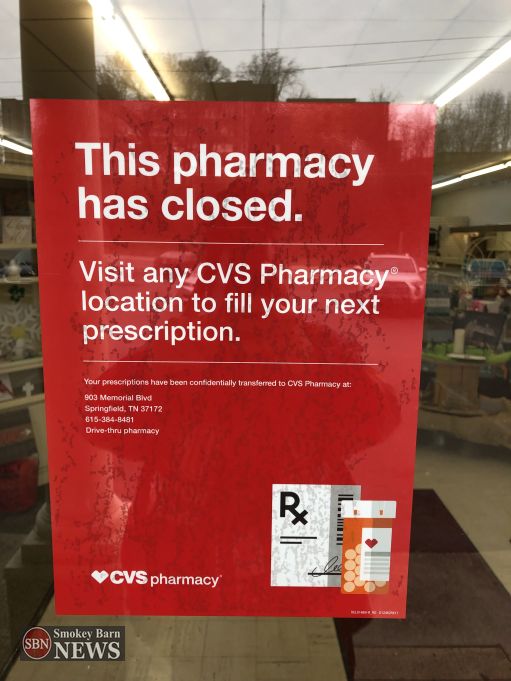 It’s important to remember that, though your prescription files have been transferred to CVS, you can choose whatever pharmacy you wish. If you prefer the home-town feel, the owner of South Side Drugs, Don Sloan, told Smokey Barn news that his staff is on standby to help you during the transition if you wish. South Side Drugs is located on Main St conveniently across from the Depot Bar & Grill, less than a mile from Springfield Drugs. MAP  Don says feel free to call his team at (615) 384-3546 and they will be happy to assist you.

As far as Springfield Drugs location at 511 Memorial Blvd, that location has been closed. If you go by you will see a note on the door indicating that your prescriptions have been transferred to CVS.

According to local historian Bill Jones, Springfield Drugs has been around a very long time. When it started out on Main Street back in the early 20’s it was called McCord Harris Drugs. (pictured right) Burdett’s Tea Shop is in the spot now.  It moved onto Memorial Blvd in 1958 and changed its name to Springfield Drugs. Fred Harris Jr owned the store and then sold it to John Hagen in the early 70’s around 1972 and then recently it was sold again.

Back in 2014, the TV series Nashville shot several scenes inside Springfield Drugs. Their untouched 1950’s style lunch counter made for some impressive shots for the series. Smokey Barn News was there and captured the film crew and actors in action. You can see the video at the top of this page, or, to watch it on Youtube click here.

The hope from citizens we spoke to is that someone will step in and re-open the lunch counter, but for the moment, it’s closed. Did you ever eat there? Who has the earliest memory of having lunch at Springfield drugs?

Tell us about your memories with Springfield Drugs in comments. If you have a photo you can send it to [email protected]