ROBERTSON COUNTY TENNESSEE (Smokey Barn News) – It was a busy night in Robertson County for our first responders. It started just after midnight and kept going all night.

The first call came into 911 at 12:02 a.m., a vehicle had crashed on Hwy 41 near the Robertson County Airport. There were two occupants including a young child. Both were transported to an area hospital. According to the T.H.P. at the scene, though the vehicle sustained heavy damage, neither of the occupants suffered life threatening injuries. Drugs, alcohol or texting were not a factor. According to the T.H.P., preliminarily, it looks like the driver fell asleep at the wheel.

Minutes later a call came into 911 about a wreck on Hwy 76. A vehicle had left the roadway,  sailed down a steep embankment and crashed into a tree. When first responders arrived the driver was gone. They searched the area but the driver was nowhere to be found.

Just as crews were preparing to clear the scene on Hwy 76, a call came into 911 about a fire in the Adams area, it was a large tobacco barn located off of Hwy 41. Adams Fire responded and North Robertson Fire and Rescue was call in to assist.   Firefighters were able to keep the fire from leaping to adjacent structures but the barn itself is a total loss.

Adams Fire Chief Ray Brown estimated the value of the barn and its contents to be about $135,000 with about $70,000 of that being tobacco. Ray told Smokey Barn News that the owners were carrying insurance on the structure but not the tobacco. 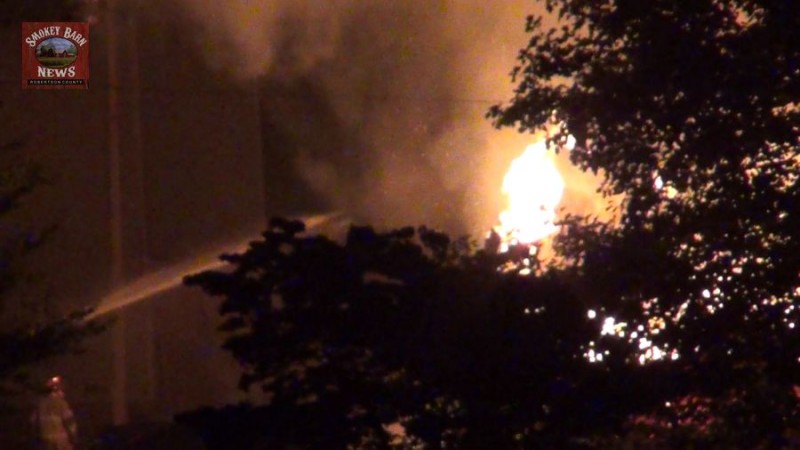 Smokey Barn News is named after the fire-cured tobacco industry so we are always sad to hear about tobacco barn fires. We can only hope the owners can find a way to absorb the loss.

Just minutes after Firefighters had cleared the scene in Adams, the T.H.P. (still on the scene of the wreck on Hwy 76) radioed for emergency crews to return to the scene. The driver had emerged from the woods looking for medical assistance. The accident is still under investigation.

Needless to say, it was a busy night for our first responders.