According to Officer Cooper with the Tennessee Highway Patrol, the 24 year old

A Chapmansboro man is very lucky to be alive after a violent wreck in Cedar Hill Saturday night. The accident occurred on  Heads Church Rd near Sandy Springs Rd around 6:41PM. The accident had Heads Church Rd completely closed while crews cleaned up the wreckage and CEMC replaced a utility pole.

According to Officer Cooper with the Tennessee Highway Patrol, the 24 year old single occupant of the F250 Super Duty pickup truck was traveling on Heads Church Rd towards Sandy Springs after leaving a friends house.

For reasons unknown at this time, the driver lost control of the vehicle,  struck a utility pole and then careened about 100 feet down a steep embankment.  The utility pole snapped in half with the force of the impact. (See photos below)

According to Cooper, after impacting the utility pole, the truck traveled another 80 to 100 feet along the side of the road tossing a sink and a stove from the bed of the truck along the way. The truck then veered sharply left into a thickly wooded area and down a steep embankment.  The truck was tossed left and right ricocheting off trees as it sailed down the embankment towards Millers Creek. 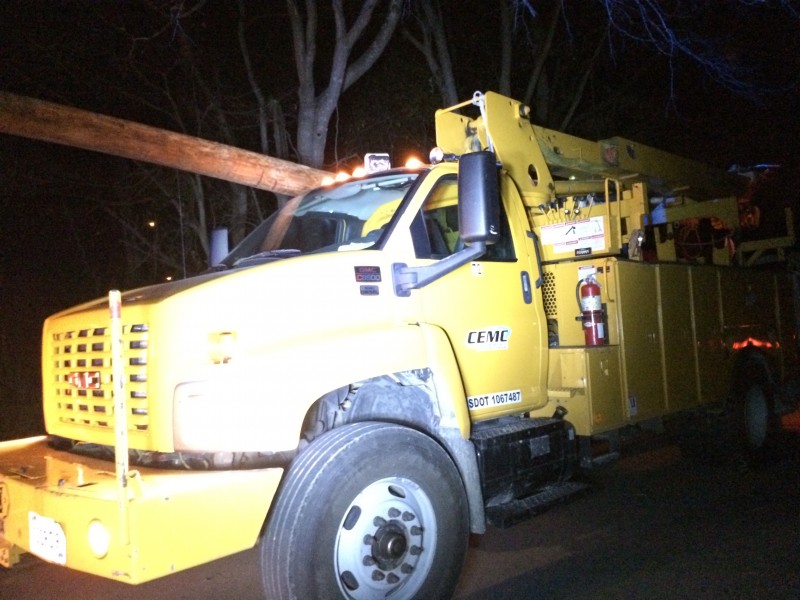 The young man either jumped out of the vehicle or was ejected before the truck struck the final tree head on. The THP accident investigator indicated that both theories were possible since the truck was never inverted but either way it would have been a violent ride for the young man.

The truck stopped about 30 feet short of a barbed wire fence and Millers Creek about 3/4 of the way down the embankment.

According to the THP, there were no witnesses to the accident and it was very dark. Luckily for the young man, a very astute couple passed by the scene minutes later and noticed dust in the air. With in minutes the couple discovered the young man and called for help. Without the quick eyed couple things may have turned out very different for the young man.

According to the THP, the young man was “semi conscious” after the wreck but was otherwise in fairly good shape considering the violent nature of the accident. The driver was

transported to Vanderbilt Medical Center in Nashville via ground.  According to the THP, the driver was not wearing a safety built.

The accident is still under investigation, however, the THP indicated that there were no signs that drugs or alcohol were a factor.

The truck was a good distance down the embankment with no vehicle access making the process of retrieving it somewhat time consuming. In addition, CEMC was called in to replace the damaged utility pole. In all, the road was closed for about two hours while crews cleaned up the scene.

As of 5:30AM Sunday, the driver was listed in critical condition at Vanderbilt Medical Center.

The staff at Smokey would like to wish the young man a speedy recovery.