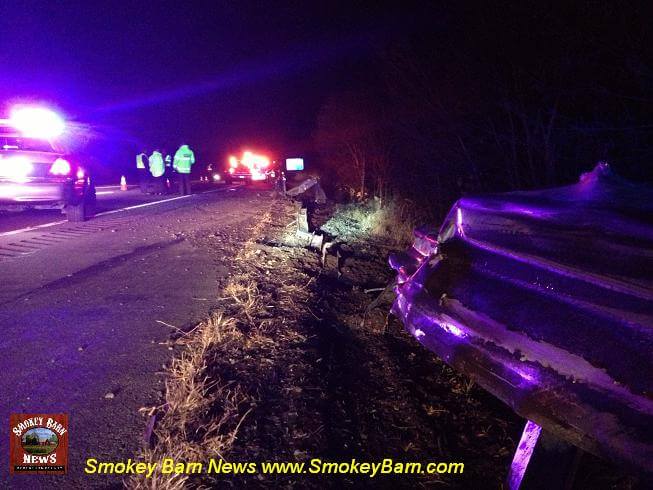 Fatal Tractor Trailer Wreck Takes One Life On I-65S Friday Night
Saturday 3AM December 1, 2012
The right lane of I-65 South will be closed for hours according to officials. The accident occurred at the 109 mile marker around 12:30 AM Saturday morning just before the Hwy 76 Exit in White House. The rig went off the roadway plowing through the guardrail and down a ravine. The double trailer landed on top of the cab which is a 2012 Freightliner.

We were asked not to release photos of the rig pending notification of next of kin.

Extraction will take well into the morning according to THP. TDOT will be closing the right lane until they can get it cleaned up. There were two trailers, the cab and all the contents as well as the driver, so it took some time.

UPDATE: (Saturday 11:45AM) December 1, 2012
THP has released the name of the driver. Gary D. Bryant 42 of Columbus, TN. He was wearing a safety belt. The report indicated that drugs or alcohol were NOT a factor but tests were requested as standard procedure.

UPDATE (Saturday 9PM) December 1, 2012
The accident actually took most of the day to be cleared out backing up traffic in White House for miles as TDOT diverted traffic around the wreck. According to THP at 9PM Saturday evening I65 is back open at full capacity. People from all across the area felt the congestion backing up through White House. A large number of semi trucks were seen coming through Cross Plains just before their Christmas parade.

Clean up crews were faced with several problems because the rig was down at the bottom of a steep ravine and there was a lot of debris.