COOPERTOWN TENNESSEE: (Smokey Barn News) – Visit Historic Frierson Chapel for an Open House in honor of Basket Rally Day, a homecoming and community gathering open to all Coopertown residents and their families, near and far, as well as former members and families of Frierson Chapel. Participants are encouraged to bring a “basket” of food, a side dish or dessert, in addition to a lawn chair, to Frierson Chapel off Old Coopertown Road on Saturday, August 16. Families will gather from 10am to 2pm.

So plan to come out on August 16th and spread the word about the once annual and historically significant event that the community hopes to recreate. The Frierson Chapel project is one being led by the Commission of Culture, History and Art with hopeful placement on the National Registry of Historic Places.

Frierson Chapel is historic from several perspectives.  First, it is an African American church whose congregation was established in 1870.  When first established the congregation named their church the Methodist Church at New Bethel.  In 1880 one of the citizens of the community sold the present church site to the congregation and the New Bethel church was built.  In 1892 a school was built on the property and offered an education through the eighth grade to the African American community.  The church continued in operation until a tornado destroyed it in 1943.  In 1946 the church was rebuilt by the then pastor, Reverend W.D. Frierson, after whom the church was named.  Through the years more than fifty parishoners were interned in the church’s cemetery.  In 1996 the church was closed due to loss of membership through death and assimilation of its members into other area churches.

Several times during the intervening years various previous members and the children of previous members attempted to preserve the church by keeping the grounds mowed and the church closed-up to the elements.  Over the years, however, the church and the school have been ravaged by the elements, vandalism and wild animals.  Today the school has been completely destroyed.  The church, however, is still in pretty good shape.  The cemetery is over grown by trees and other
vegetation.  This past May 2013 in an effort to better preserve the church and grounds the last members of the congregation persuaded the United Methodist Church to donate the church and grounds to the Town of Coopertown.

The church register was found and returned several years ago to the United Methodist Church in Clarksville.  It is hoped that it can be recovered.  It is believed that this record will provide information as to whom is buried in the cemetery, who the church members were throughout the years, and other important historical data with regard to the church.  The hope is that the ancestral information can be used by current and former citizens and relatives of our Town and members of the church when searching for non-living family members.

It is planned to rebuild the school, and restore the cemetery and the rest of the grounds for use by the community and visitors interested in the history of our nation, state and community. 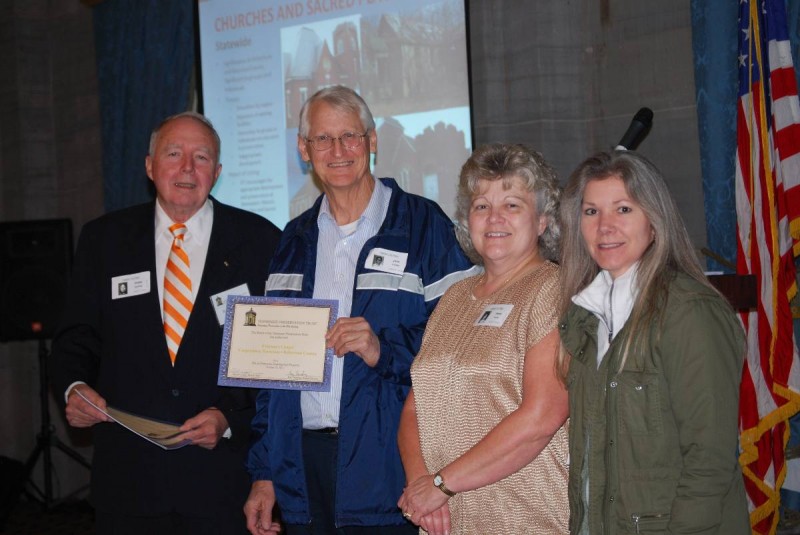 The Tennessee Preservation Trust’s Ten in Tennessee Endangered Properties List Program is TPT’s strongest advocacy tool for the state’s most endangered historic sites. Each year, TPT seeks nominations for the “Ten in Tenn” from the public from each of Tennessee’s nine Development Districts.

What began in 2001 has grown to be a successful program for garnering awareness for Tennessee’s threatened historic properties. Many of the sites listed have received grants from the Tennessee Historical Commission (THC) and the Tennessee Department of Transportation (TDOT), protecting these resources for generations to come. Listing on the Ten in Tennessee Endangered List raises awareness of the property’s historic value, gives credibility to restoring the building, and draws the much needed attention of the public.