An industrial accident has occurred at Hail & Cotton… 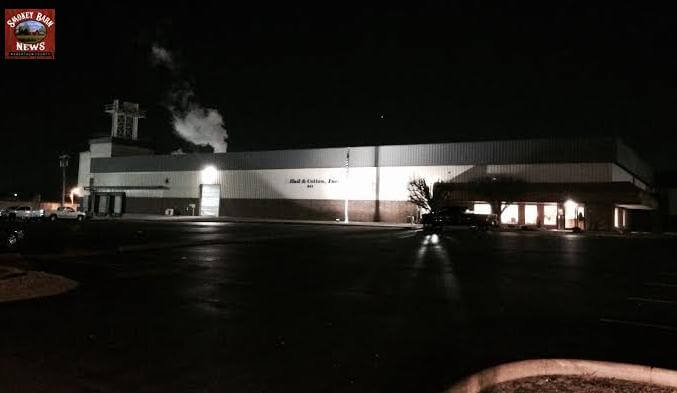 Smokey has confirmed with Robertson County Central Dispatch that one person has died in the accident. As we understand it so far the accident involved an overturned forklift.

Springfield Police have released the name of the victim, he is Frankie Woodard, 31, of Springfield.

The call came into 911 at 2:30AM Tuesday morning. Springfield Fire and Robertson County EMS were dispatched to the scene and currently,  per standard procedure, a Springfield Police detective is investigating the incident.

According to Lt Rodney Hoover with the Springfield Fire Department, the accident occurred outside behind  Hail & Cotton’s facility at 815 Bill Jones Industrial Drive. It appears as though the victim was trying to put some kind of box or container into the dumpster when the forklift/tow-motor tipped over on its side.

When crews arrived employees had already freed the man. Initially LifeFlight was called but later canceled.

Employees at the facility were sent home after the accident.

According to their website Hail & Cotton grows, purchases, processes and stores leaf tobacco for supply to manufacturers of all consumer tobacco products.

A friend had this to say about Frankie; “There is so much I could say about Frankie. The first thing that comes to mind is his loyalty to his friends and family. Frankie didn’t have friends, we were ALL his “family” and that’s exactly how he treated us. His smile was one in a billion and he could make you laugh even when it felt your world was falling apart. He was an amazing friend and one we will forever miss.” Ashley Faye Wallace

Friends tell Smokey that Frankie was married, his wife’s name is Brittany Woodard. He has one daughter- Amiyah and a Stepdaughter-Avayah. (Pictured)

The accident is still under investigation but Hail & Cotton did release the following statement: “Hail & Cotton inc is deeply saddened by the incident that happened this morning involving the loss of one of our contracted workers. Our prayers and full support are with his family and friends during this difficult time. Hail & Cotton inc is working with appropriate authorities including Tennessee OSHA, which is currently on site to fully investigate this incident, ” Rod Roe, CFO of Hail & Cotton Inc.

Mr Woodard was a contracted through Industrial Staffing, they have released the following statement regarding the accident.

“All of us with Industrial Staffing are deeply saddened by the tragic passing of Frankie Woodard. Our thoughts and prayers go out to his wife, their children and all of the family. This terrible situation is being investigated by the proper legal authorities right now. We cannot make any statements concerning what happened until the authorities are able to do their job. We will, of course, cooperate fully with the investigation. We will provide additional information when it becomes available; again, we are deeply saddened and offer our prayers and condolences to Mr. Woodard’s family and friends,” Steve Howell Chief Manager, Industrial Staffing.

This is a developing story we will have more facts after the investigation is complete.

Smokey’s thoughts and prayers are with the Woodard family as they face this tragedy.