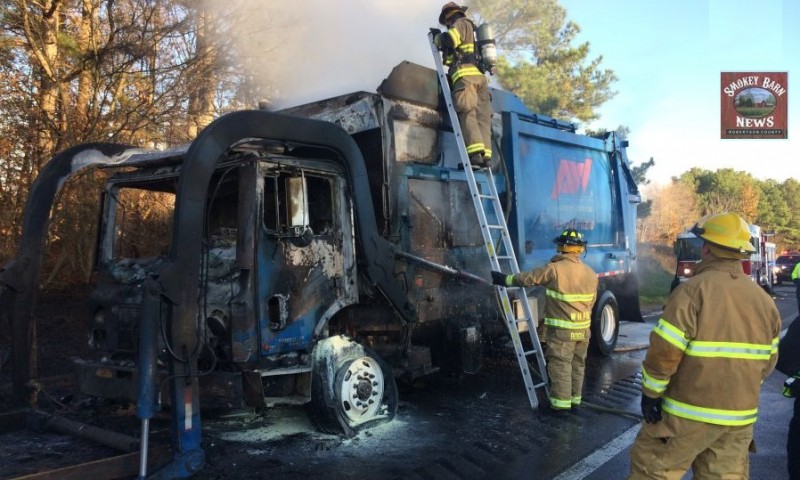 WHITE HOUSE: (Smokey Barn News) – Interstate-65 South near White House was brought to a crawl Wednesday morning after a garbage truck caught fire on the interstate.

The driver heard a “pop” and lost power at the 106 mile marker, minutes later the truck was a fireball. Fortunately the driver was able to pull over and escape the fire without injury.

Jon Graves of Goodlettsville was heading North on I-65 on his way to work at Tate fabricating in White House and was able to snap a few photos. Graves’s was passing shortly after the fire started, as you can see, firefighters were not on the scene.  One of  Graves’ photos (left) shows that the fire started at the front of the truck.  You can see more photos taken by Graves in the album below.

The truck was on its way to the dump fully loaded with ten tons of garbage, according to Assistant Fire Chief Joe Williams.

Three agencies were called in to tackle the fire including crews from the White House Community Volunteer Fire Department, White House City Fire and Millesville Fire. Robertson County EMS and EMA were also called in.

The White House Community Volunteer Fire Department was the first on the scene, what they saw was a fireball, Chief Williams said.

“The fire started in the cab which spread to the garbage so we needed some extra water on the scene,” Chief Williams said. “The fire was mechanical in the truck, it didn’t start in the trash, it was the motor or electrical.”

I-65 South was reduced to one lane for several hours while crews put out the fire and cleaned up the interstate. The fire occurred around 6:30 a.m. and the scene was cleaned up and the lane reopened by about 9:00 a.m.

The truck is owned by Republic Disposal which services the middle Tennessee area.

Chief Williams said there was another wreck, a passenger vehicle,  at that same exact location just a few hours earlier at 1:30 a.m.