The hotel’s owner, Nick Patel, told police that a black male entered the front lobby of the business, displayed a silver handgun, pointing it at him, and demanded money.

The inner door and window were both shut and the suspect was unable to gain any further access to the business or obtain any money. The suspect fled on foot towards 16th Ave area.

A witness told police that she saw a man standing outside the lobby and observed him go into the lobby thru the front door, she could hear him demanding money from Mr. Patel.

Mr. Patel told Smokey Barn News that after the suspect pulled out the gun and demanded money he was scared to death but he also knew the robber couldn’t get at him with the double lined thick protective glass. 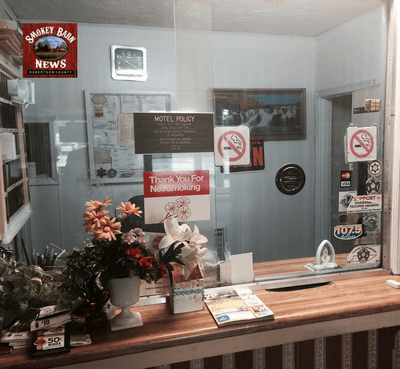 “He pointed his gun at me and said ‘Give me the money,’ I just called the law,” Patel said.” The two could clearly see each other through the thick protective glass but not much else was going to happen.

After seeing that the Mr Patel was calling the police instead of handing over his money the suspect turned and ran out the door towards East 16th Ave., Patel said.

Patel said the suspect seemed very young, about 21 or 22 and skinny.

Patrol units canvassed the area but were unable to locate any suspect.