A poster made by a student at Springfield High School (located in Robertson County TN) and placed on the wall in a classroom has sparked a strong reaction from the community. The poster said to depict the  “the five pillars of Islam” was part of a history class research project. The reaction from the community was fast and strong. Smokey received many emails, private messages and even phone calls from concerned citizens that were worried that a permanent marker had been placed in the school. The Robertson County School board received enough inquiries that they released the following statement;

“The poster entitled “the five pillars of Islam” was a student’s work as part of a WORLD GEOGRAPHY class in which the students did class projects while studying the Asian/Arab countries located in the Middle East.  The teacher covers all regions of the world in the course and the students learn about the culture, economy, climate and religions of each of the countries they study.  The school system is not endorsing any religion of any region and this is simply a student’s project while learning about these Asian/Arab countries.  Someone took a picture of this one poster and has tried to imply that the school is promoting Islam, which is totally false.”

So it would seem that Inaccurate information on the posters location and the total number of them caused the communities reaction. Rumors on the Internet indicated there were many posters placed up and down the halls of the school as some kind of a permanent marker. By the schools statement there would have been just a few posters inside of a classroom.

Smokey has acquired several photos of the posters in question from a source wishing anonymity. Smokey has confirmed the legitimacy and authenticity of the photos and believe they are accurate and correct.  We have also had a reasonable look at the entire room the posters are in,  what we saw lined up with the schools depiction of the room with the exception that there were many more general historically based posters on the walls of the room then we originally understood. The posters covered the gamut,  the room did have the posters depicting “the five pillars of Islam” but also posters on “Proud to be an American”,  Asian, Australian and New Zealand historical timelines and an american fag made from pictures from the 911 terrorist attacks.

Out of the entire room full of posters about 6 covered the basic tenets of Islam. Smokey also learned that all of the artwork in the room was from last year 2012, they were not new posters but posters left over from the end of last year.

Below is a photo of the same poster that was propagated on the Internet and caused the initial stir. The second photo shows the group of posters as they appeared on the wall of the classroom during a recent open house.  To protect the identities of the students we have decided not to release all of the photos of the posters and we have pixelated the group photo, but all six posters were all relatively similar in their depiction of the basic tenets of Islam. 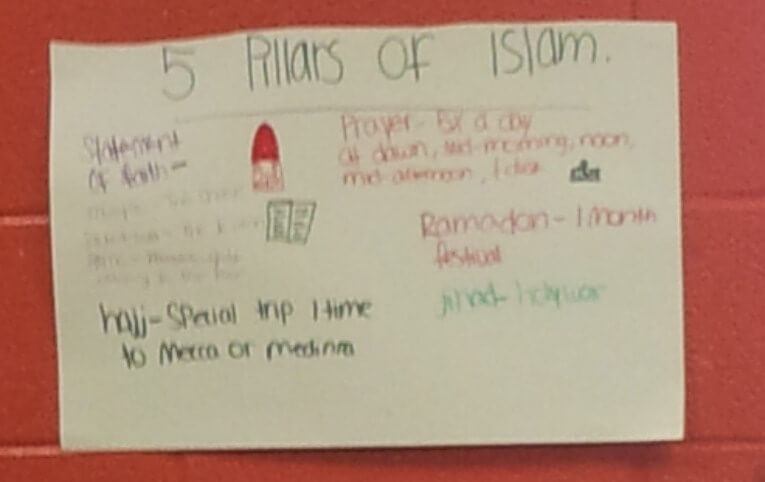 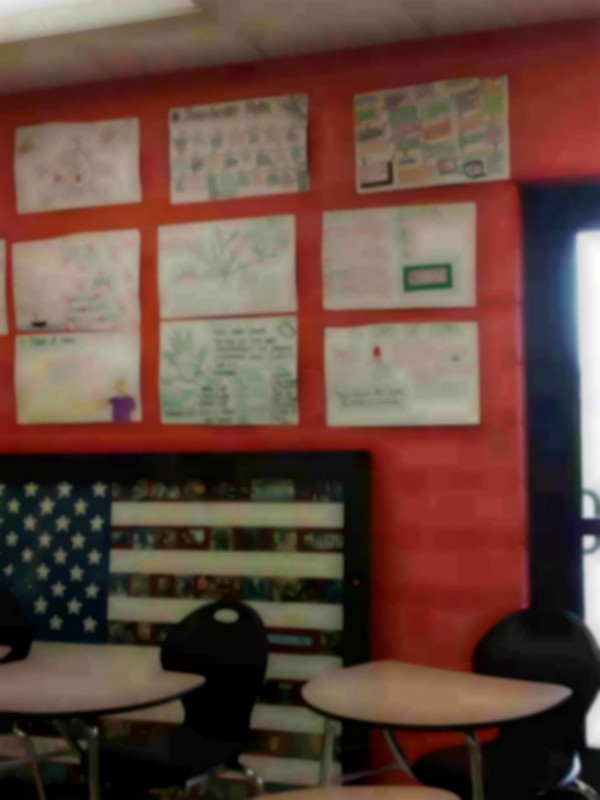 World Geography is a course that studies climates, cultures, populations, politics economics, and religions of the world.

We would like to reiterate the fact that these posters were student projects from last year’s world geography class, which followed the curriculum standards for studying various regions of the world.

We would also like to reiterate that neither the school system, the school, nor the teacher promote or endorse any religious faith discussed in this course.

Smokey will continue to investigate, if we find any new information we will provide it to you.