Back on November 3rd Jo Byrns School  was vandalized with graffiti (See PHOTO below) between 12:00AM and 7:00AM Saturday morning. The graffiti was painted on the baseball dug out facing the student parking lot behind the gym on the left side of the school campus.

The graffiti would have been in plain sight of all the players coming in Saturday Morning. The graffiti was quickly covered but the nice artwork will need to be redone.

According to Jo Byrns High school Baseball and Basketball Coach Ronny Carlisle the graffiti wasn’t there after the high school playoff game the night before or at midnight when Carlisle left the school. No one really saw it until Saturday morning before the first round of Junior Pro Football Playoffs.

A smiley face was used to cover one word in the PHOTO below. 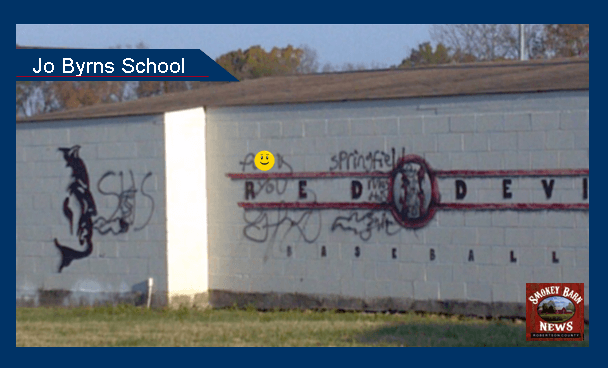