in addition to the personal belongings of one of the victim…

SPRINGFIELD TENNESSEE: (Smokey Barn News) – Thursday evening Springfield Police were looking for a man they say was pretending to need help with a jump-start

Police alleged that while the good Samaritans were jump starting his vehicle he was removing items from their vehicles.  One of the victims lost an expensive purse that was a gift, the victim didn’t realize the purse was gone until she arrived home. There were two alleged attempts Thursday evening in Springfield by this same individual using the jumper cable ruse, according to Police.

The suspect was reported to be driving a black Ford Taurus with temporary tags and  was described as a white male late 20’s early 30’s with two pairs of white sunglasses on his cap. Around 11:00PM Thursday evening (shortly after Smokey released our Fraud-Alert report on Twitter and Facebook) a call came into police about a suspicious individual at the Holiday House, a senior living facility in Springfield located at 400 22nd Ave E. 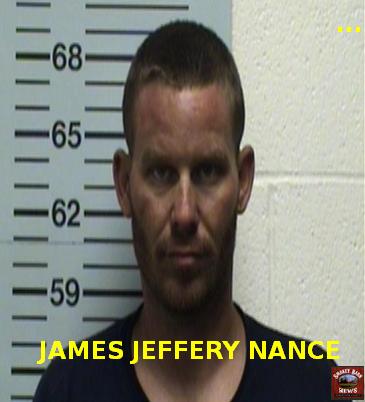 Acording to police, when they arrived at the Holiday House they found James Jeffery Nance ,29, of  Springfield unconscious on the ground. Also in the vicinity of Nance was a black Ford Taurus. In the vehicle police say they found a change purse and a check book belonging to the woman from earlier in the evening. The expensive purse however was not recovered. According to Police the suspect said he “threw it away” and police were not able to locate it.

Police also told Smokey that in addition to the personal belongings of one of the victims, a set of jumper-cables was recovered from the Taurus.

Later the next morning police started getting calls from residents at the Holiday House indicating that their vehicles had been burglarized. Police went back to the Holiday House around 9:00AM Friday morning.  According to Police, the Taurus was searched again and several of the missing items were discovered. Additionally police say that a subsequent search of Nance’s effects “property” at the jail revealed more items reported missing from vehicle(s) at the Holiday House.

Days earlier police had taken a report about some stolen tools from a I.A.C. North America located at 801 Bill Jones Industrial Dr. in Springfield. According to police, during the process of their investigation, Nance was also developed as a suspect in the missing tools, and according to police, Nance allegedly sold the tools to a local pawn shop.

After being taken into custody and booked into the Robertson County Detention Facility in Springfield, Nance was charged with two counts of Burglary Of A Motor Vehicle, two counts of Vandalism, Three Counts Of Theft Under $500, Theft Of Property and Public Intoxication. As of 8:3oPM Friday evening  Nance had not bonded out of jail.