The crash occurred Wednesday near mile-marker 27 on Interstate 90 near Sheridan around 11:48 a.m. MAP The Wyoming Highway Patrol is investigating the crash.

According to officials in Wyoming, 62-year-old Barry Fulton and his wife, 57-year-old Karen Bracey Fulton, were riding a 2008 Honda Gold Wing traveling westbound on Interstate 90 when the motorcycle experienced some kind of mechanical issue that triggered an accident.

Barry Fulton was transported to the Sheridan Memorial Hospital for injuries sustained in the crash and has since been discharged. Karen did not survive. She succumbed to her injuries at the scene of the crash. Both Barry and Karen were wearing proper safety equipment.

Equipment failure is being investigated as a contributing factor, officials said.

Karen worked at Kroger for many years and she is well known in the Springfield area. Her parents are Ralph and Jerry Ann Bracey.

The Robertson County Funeral Home is handling the arrangements. Services for Karen will be held in the latter part of next week. Refresh this page for updates.

To remember Karen, Kroger set up a remembrance table. A note reads:

“Karen was a dedicated woman and worker. Karen worked at Kroger for 40 years, since high school. She was loving, family-oriented, helped everyone she encountered, and she will definitely be missed by her Kroger family. Please keep her family in your prayers.” 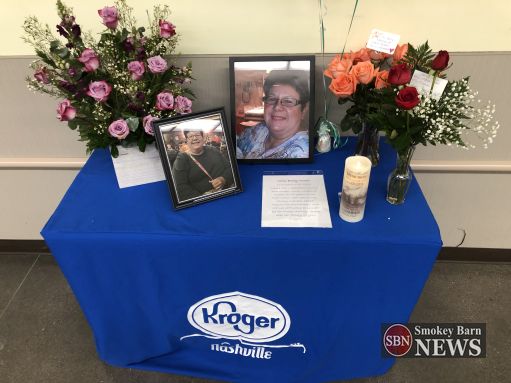