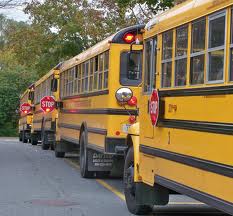 Robertson County School Officials are investigating an incident involving a Krisle Elementary School bus on the first day of school. As we understand it the driver hit a bump or pothole that apparently jostled the bus. The kids all seemed fine and the driver finished the route according to Robertson County Commissions Coordinator Jim Bellis.

About an hour after the driver returned to base and parked the bus calls started coming in from parents about injuries their children had sustained on the ride. At least 4 possibly five children were taken to NorthCrest by their parents with bruises. One source told Smokey that one child ended up under the seat and hit something hot. None of the injuries reported so far have been more than superficial but apparently the parents are trying to figure out exactly what happened.

An investigation by the R.C, Transportation Supervisor Jerry Partlow is presently under way with an examination of the route to try and determine the exact location of the incident and what happened. They are trying to determine  if the driver left the roadway and impacted a curb or if there was an anomaly on (or in) the road.

Smokey will keep you posted on any further developments.