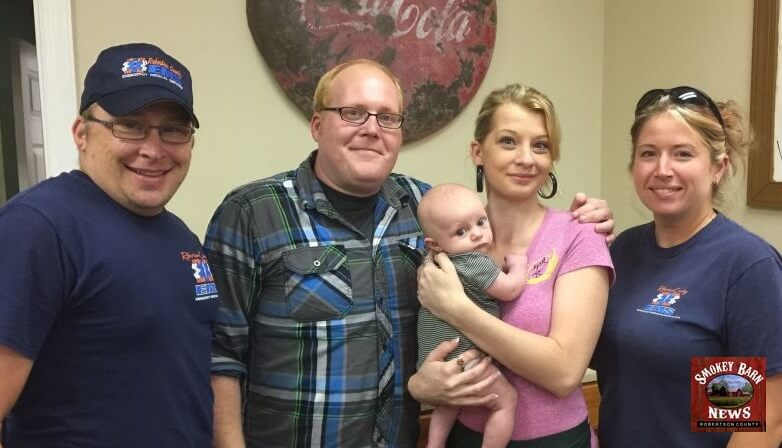 GREENBRIER TENNESSEE: (Smokey Barn News) – Back on June 4th Samantha Powell of Greenbrier, in her ninth month of pregnancy, thought she was going into labor. The family jumped into the car and, based on their location, headed over to Saint Thomas Midtown Hospital in Nashville. 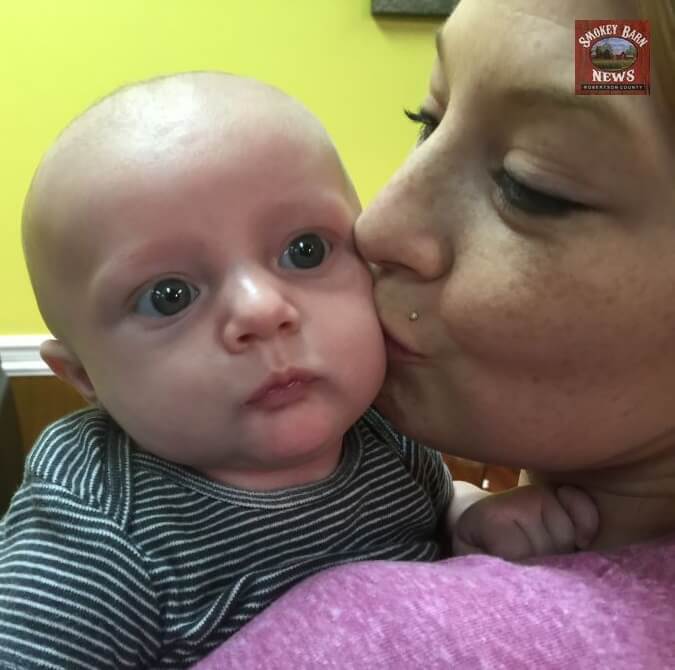 Once at the hospital, doctors told her she was just dehydrated and sent her home. “I went home, drank some water and took a nap, when I woke up his head was out,” Samantha told Smokey Barn News.

“I ran to the kitchen, my fiance Stephen Sloan and his dad were outside, I called for them. Stephen washed his hands and started boiling water, I was fully in labor!”, Samantha  said.

Since it was pretty clear that driving Samantha to the hospital in the family car wasn’t going to happen they called 911 for help. Within minutes,  Advanced EMT Kelley Jackson and Paramedic Bruce Bracy from Robertson County EMS arrived at the scene.

With the help of Firefighters, Kelley and Bruce quickly loaded Samantha into the ambulance, turned on the lights and sirens and headed for NorthCrest Medical Center in Springfield, they made it about ten feet.  By the time the ambulance was at the  end of the driveway the baby (Grant Sloan) was out. “He flew out and Bruce caught him, the pain was intense, I had NO epidural, I was screaming, I FEEL EVERYTHING, Samantha said laughing.”

For the medics, it was Kelley’s first baby and Bruce’s fifth, “Bruce said, ‘I think you have a couple of minutes, ‘I was like, nope, I pushed once, twice and he was out.’ Everyone was drenched in sweat and I was scared to death,” Samantha said.

“He was a beautiful kid weighing in at seven pounds 12 ounces , nice and healthy, breathing adequately, everything was normal,” Bruce said with a smile. “Everyone at NorthCrest was great, I had a great stay there too,” Samantha said.”

“They (Kelley and Bruce) were there for me, it was exciting and scary, Samantha said as she looked at the medics”

Medics Kelley and Bruce visited with baby Grant during a reunion on Thursday at Farm Fresh restaurant in Greenbrier. By their ear to ear smiles it was clear that they were glad to see that baby Grant was doing well and very proud to have played a role bringing him into the world.

As if their lives weren’t hectic enough, Stephen and Samantha are the owners of Farm Fresh. Farm Fresh is a new restaurant that just opened up two weeks ago in Greenbrier.  The restaurant has been a dream of Stephen’s for a long time. They call it “Farm Fresh” because a lot of their food is locally grown. Stephen grew up in Greenbrier so he knows the area well. They offer fresh sides everyday, go check’m out, they’re located at 2354 Hwy 41 in Greenbrier.