SPRINGFIELD TENNESSEE: (Smokey Barn News) – Around 10:30pm Saturday night, an off duty Springfield Police Sergeant, Scott McLean, drove past the Douglas and Company on Tom Austin Highway in Springfield and observed what 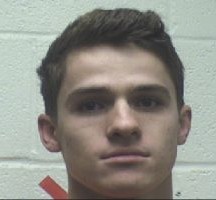 he believed was an attempted burglary in progress. MAP

Patrol deputies with the Robertson County Sheriff’s Office responded to the area and located the suspect’s vehicle.

Deputies interviewed the driver who admitted to attempting the burglary. William Ragland, 20, of Clarksville, was subsequently arrested and charged with attempted burglary, possession of burglary tools, and vandalism.

Ragland  was booked into the Robertson County Detention Facility with a $25,000 bond.

Coincidentally, Sergeant Scott McLean is also the Chief Deputy of Joe Macleod who is running for Sheriff.