The burglaries occurred in the Owens Chapel, Youngville, and Orlinda area..

On Tuesday April 22 Timmy Raines, Jr. 33 of Orlinda was arrested by the Robertson County Sheriff’s Office in connection with ten recent burglaries. Most of these burglaries occurred in the Owens Chapel, Youngville, and Orlinda communities.

Deputies received a call Tuesday April 22 from a homeowner on South Lamont Road in Orlinda stating that their house had been burglarized. After investigating, it was discovered that Timmy Raines, Jr. was responsible for the break-in. Raines was apprehended based on tips and information from the homeowners and the public. He had stolen property in his possession when caught, and later confessed to the crimes. Detectives and deputies working the case were able to recover and return many items stolen in the burglaries to their owners. “I want to commend our patrol deputies and investigators for their diligent efforts to solve these burglaries, recover property, and apprehend the person responsible,” said Sheriff Bill Holt. 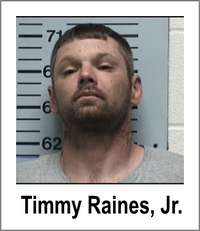 “While it doesn’t make the citizens any less of a victim, it is at least somewhat comforting for us and the homeowners to be able to return items that were taken from their homes.” Chief Deputy Michael Van Dyke praised the public for their help. “We are very grateful for the homeowners’ assistance in this particular case, and the assistance we receive every day from the public,” said Chief Van Dyke. “The burglars and thieves should know that the citizens of Robertson County and law enforcement are united in our efforts to ensure that Robertson County continues to be a great place to live and raise a family.”

Raines was booked into the Robertson County Detention Facility with a $30,000 bond.