BREAKING … New Friday morning…
According to the Robertson County Sheriffs Office moments ago, Deputy Josh Wiley, who was shot and stabbed Wednesday, has been upgraded to stable condition. The Sheriffs Office is asking for continued prayer for his recovery.

SPRINGFIELD TENNESSEE: (Smokey Barn News) – A Robertson County Sheriff’s Deputy is facing major surgery after being stabbed and shot yesterday while transporting a prisoner from the Robertson County Jail in Springfield to a medical appointment in Nashville.

Now Robertson County Sheriff Bill Holt is releasing more information on how the Deputy and his partner are doing this morning.

“In law enforcement, we train for the worst, but pray it never happens. Yesterday, an inmate viciously and violently attacked one of our deputies. Unfortunately, my deputies had to respond in the way no law enforcement wants to – with deadly force.

“One of the deputies suffered multiple gunshot wounds, and the other deputy has suffered the traumatic stress of the incident. The support from our local community has been tremendous, and the assistance from our fellow law enforcement partners including Metro Nashville Police Department and Vanderbilt University Police Department has been incredible and humbling.

“The care provided to Josh Wiley and his family by the Metro emergency medical staff and the doctors and nurses from Vanderbilt University Medical Center has been outstanding.

“Deputy Wiley is still in critical condition in the Intensive Care Unit after surgery yesterday and is facing major surgery today. We ask that you continue to keep Deputy Wiley and his family in your prayers. Please also keep Deputy Tomisha Jones and her family in your prayers as she deals with the traumatic stress of this incident.” Sheriff, Bill Holt

ROBERTSON COUNTY TENNESSEE: (Smokey Barn News) – According to PIO Ryan Martin with the Robertson County Sheriff’s Office, there was an Officer involved shooting at a medical office at the Vanderbilt’s 100 Oaks Campus in Nashville around 1:30 this afternoon involving a Robertson County Deputy.

“An inmate attacked an officer and the inmate has been shot and is now deceased,” Martin said. The officer (A Robertson County Sheriff’s Deputy) now identified as Deputy Josh Wiley, was shot and stabbed during the incident according to reports and has been transported to Vanderbilt Medical Center for treatment in critical condition.  His partner, Deputy Tomisha Jones, was not injured

The two corrections officers were transporting the inmate to a medical appointment from the Robertson County Jail when the incident occurred.

Reports stated the building was evacuated due to the shooting.

Police are now releasing more information. The name of the inmate that died during the altercation is identified as Rodney Cole, 37, of Henning Tennessee, a convicted bank robber.

According to Metro Nashville Police, who are in charge of the investigation, Cole was being transported to Vanderbilt Medical Center for a routine medical appointment on the third floor at 719 Thompson Lane.

When Deputy Jones  entered the bathroom she saw the prisoner (Cole) on top of Deputy Wiley. Cole was repeatedly stabbing Wiley with a long screwdriver. 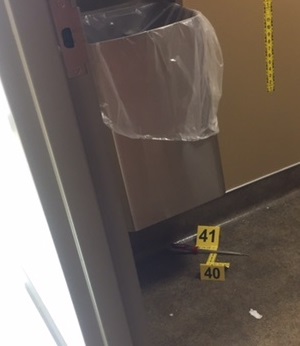 During the ensuing struggle between the two deputies and Cole, multiple shots were fired and Deputy Wiley was was critically injured. Mr Cold died at the scene.

Where and how Cole acquired the screwdriver (pictured right) is still under investigation.

Metro Nashville Police said in a press conference that Deputy Wiley was stabbed as well as shot.

Deputy Wiley is at Vanderbilt Medical Center and we are waiting for an update on his condition.

Cole’s 15 year sentence for bank robbery began in 2013. He has previous convictions for aggravated robbery, robbery, burglary, and theft. 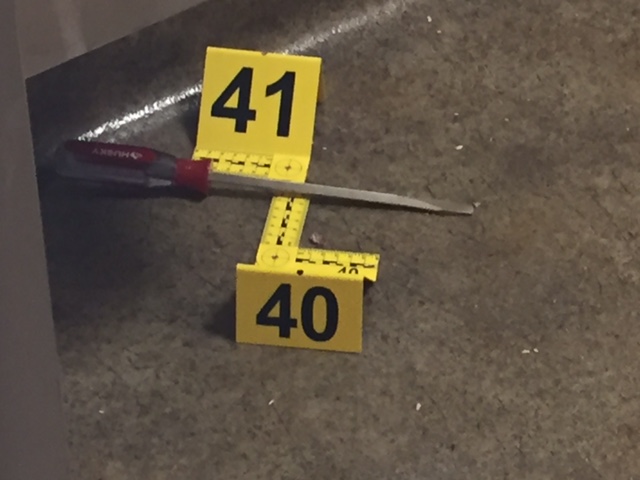