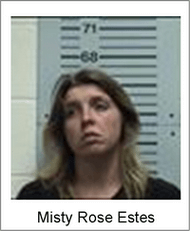 Smokey has confirmed that Misty Estes was indicted by the Robertson County grand jury for 1st Degree Murder and arrested by The Robertson County Sheriff’s Office on September 4th in connection with the stabbing death of Jon-Michael Goostree on July 6, 2013. Her bond was set at $200,000.00. She has not posted bond as of Monday Sep, 9th.

(Coopertown/Cedar Hill area) A man in his 20’s was transported to Vanderbilt Medical center after being stabbed (in the neck we believe) at a home located on Burgess Gower Road.. Information is still coming in but what we know so far is the victim was resuscitated using CPR and then stabilized at Northcrest Medical Center. He was then transported to Vanderbilt Medical Center. According to a representative with Coopertown Police the incident started with an argument that escalated. Another party (a female) was also injured and was being treated at Northcrest Medical Center. The Robertson County Sheriff’s Department is investigating the case and have indicated they can’t release any facts at this phase of the investigation..

Smokey has just learned that the victim Jon Goostree has died. On Saturday evening July 6th Jon received a stab wound in an altercation that occurred around 7:25pm, according to the Robertson County Sheriff’s office. The sheriff’s department official statement on the incident is that there was an altercation Saturday on Burgess Gower Rd that resulted in Goostree receiving a  stab wound. He was transported to Northcrest. Goostree was pronounced dead Sunday morning around 7AM Sunday. The altercation occurred at 2038 Burgess Gower Rd in Coopertown.

No charges have been filed at this time but there is an active investigation ongoing and investigators worked throughout the night on the case.

As soon as more information becomes available we will get that to you.

At approximately 7:25pm yesterday evening (July 6), Robertson County Central Dispatch received a call in reference to an altercation at 3028 Burgess Gower Rd. The facts received from witnesses indicated an altercation that resulted in the stabbing of victim Jon Goostree. He was transported to local hospital and pronounced dead at approximately 6:30am this morning. Investigators with the Robertson County Sheriff’s Office worked through the night interviewing witnesses and collecting evidence. Criminal charges are pending the results of the ongoing  investigation.

We will release more information as soon as it is available.

My heart an soul aches knowing that he was such a wonderful guy who would help anyone he could. Been home since January an would bend over backwards to help a friend in need. He loved to go fishing and being with friends and family, and loved to be out doors and on a bike. He taught my son how to ride a bike and potty trained him.  Jon was my world, we had fights but who didn’t,  I just cant imagine that he is gone, breaks my heart. My son will never have his uncle goose again ,  Jon has taught him so much.