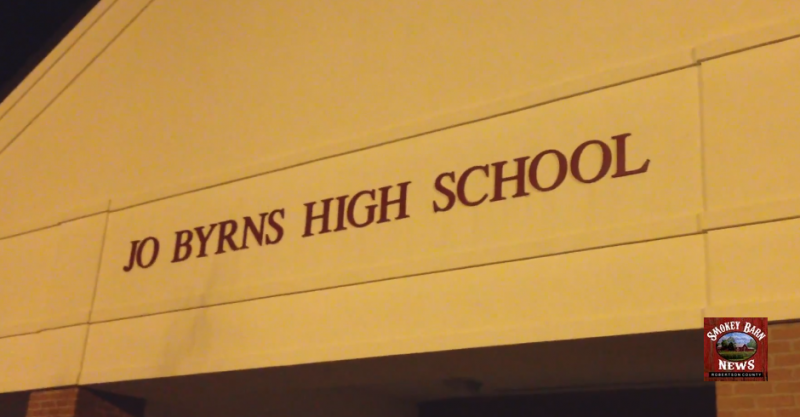 CEDAR HILL TENNESSEE: (Smokey Barn News) This is one of those stories that has the capacity to reflect the character of a reporting agency. It’s our goal in reporting this story simply to dispel rumors.

Though there is a 22. round involved in this story, and the incident did occur at a school, there is no gun or weapon of any kind connected with it. After speaking to several sources, Smokey Barn News has confirmed that a Jo Byrns High School Student (a football player we’re told) had or found a 22. caliber round.

The student then “threw the round at a wall and it discharged,” according to officials with the Robertson County Sheriff’s Office who is investigating the incident.

Officials told Smokey Barn News that no one was hit by the round (bullet) but the shell casing did make contact with a student.

Officials say the shell casing hit another student in the leg. The student was taken to NorthCrest Medical Center by a guardian to be checked out but we are told for only precautionary reasons.

The incident occurred after school in a locker room, according to officials but 911 dispatch was not contacted until after the student was taken to NorthCrest. What may have alerted some citizens is that, NorthCrest (being a reputable hospital) would have a legal responsibility to report any injury involving any part of a bullet or a gun to authorities.

So with that in mind, a call was placed to 911 at :8:02 p.m. by NorthCrest and the Robertson County Sheriff’s Office responded.

According to the Sheriff’s Office “the wound” was very superficial.”

According to Robertson County School officials,  they are aware of the incident and are conducting their own investigation but would release little more.

The incident is still under investigation and charges are pending.

The age of the student has not been released by authorities.