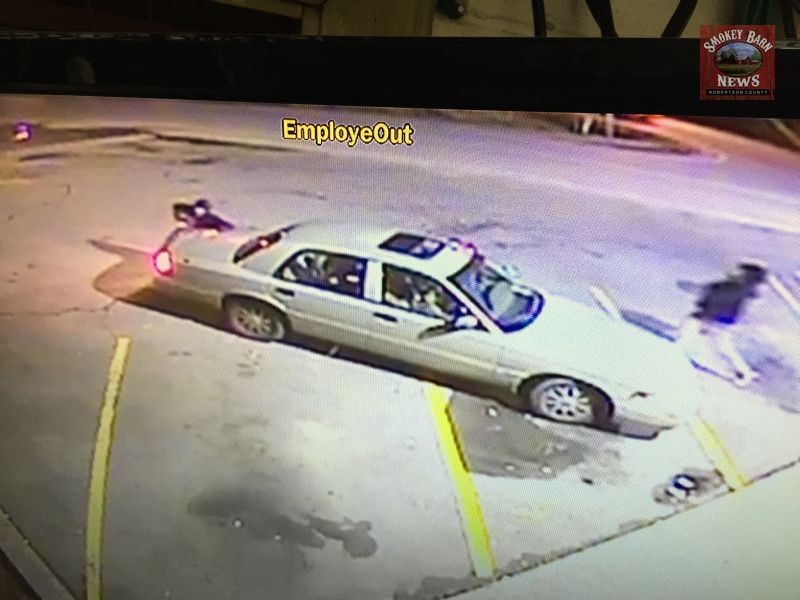 As soon as the clerk saw the weapons, she ran towards the back of the store and was shot in the lower leg, according to police. She was transported to Skyline medical center.

The two suspects fled to a vehicle described by police as an older model (2011) Grand Marquis (Pictured below) where a third suspect (the driver) was waiting. The suspects then fled south on I-65.

According to police, no money was taken.

Smokey Barn News talked with one of the other clerks that work at the gas station. The clerk told Smokey Barn News, “I spoke to her a little while ago and she’s doing pretty good.”

Chief Pat Brady with White House police told Smokey Barn News that several police agencies are looking into the possibility that these could be the same suspects wanted for a robbery that recently took place in Portland. Full video interview here.

Chief Brady also confirmed that the clerk’s injuries were not life-threatening.

We reached out to the victim, we’ll call her Ashley. Ashley gave us an account of what happened. “I was texting on my phone, looked up and there he was. He told me ‘Give me the money.’  I stood in shock, then ran off, that’s when I was shot.  I ran outside and hid behind the neighbor’s house.”

Ashley told us that she has four children and in the heat of the moment, her thoughts were with them. “I was scared for my four kids, I said, ‘Please don’t shoot me, I have four babies at home.”

UPDATE: 4:50 p.m. White House Police Chief Pat Brady has just confirmed with Smokey Barn News that detectives have confirmed that the suspects in this robbery are the same suspects wanted in connection with an armed robbery in Portland TN.

An Exxon Market located at Highway 52 and Highway 31 W. was robbed at gunpoint Tuesday morning. In surveillance video, you can see two men entering the market brandishing guns and demanding money.

The employee complied before the pair ran out of the market in a waiting get-away car. The men were last seen wearing hooded sweatshirts and bandanas over their faces. They fled in a white Ford Mercury Grand Marquis.

We will bring you more information as it becomes available.