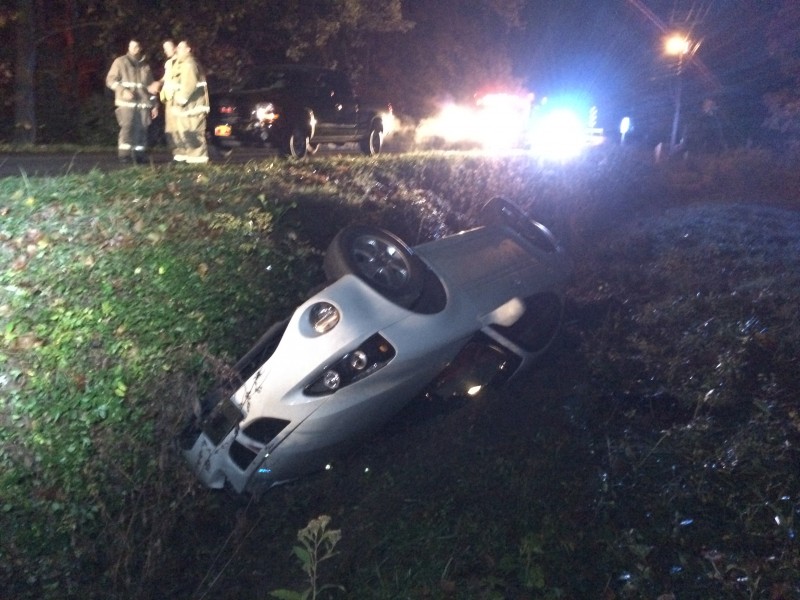 was heading North on Kelly Willis Rd when he lost control of his vehicle in the rain. The accident occurred Tuesday evening around 9:15 PM just past a sharp bend in the road.

The driver was complaining of shoulder pain but was otherwise in good shape. Smokey spoke to the young man’s father, he said he credits the vehicle, a 2006 Grand Prix, for minimizing his son’s injuries. The driver was the only occupant of the vehicle and he was transported to Skyline Medical Center by his mother.

Engineer Michael Williamson with the Greenbrier Fire Department said the roads are slick just after a light rain. The slick road even made it somewhat problematic for Cunningham Towing to pull the vehicle back onto the roadway. As crews attempted to pull the vehicle out of the ditch, even with tire stops, the rear tires of their large tow truck just slid sideways like they were on ice.

The accident had Kelly Willis closed for about two hours while crews cleaned up the scene. Ultimately crews were successful pulling the vehicle out of the ditch.

This is a dangerous stretch of road, in just the last year or two there have been at least three wrecks at this same location.

As you can see under the photo gallery below, one of the wrecks was a fire truck and all three wrecks were rollovers. This is the time of year when the roads start getting slick. Lowering temperatures and increased precipitation along with increased deer activity make for some challenging road conditions. Advice from officials is to reduce speed and keep your eyes on the road.

Back on January 14, 2013 a teenager walked away with minor injuries after a scary wreck that had her pinned in her car with water coming in. The accident occurred on Kelly Willis Road north of Scenic Drive at about 11AM. No other vehicles were involved in the wreck.

Back in 2012 he a Fire Truck overturned at the same location with three on-board.