If you think it’s hopeless..

Robertson County has some older unsolved murder cases, like Christopher Nash who was shot and killed back on August 20th 2011 and Rashaud Singletary who was murdered back on May 6th 2012. In hopes of moving those cases along, the Governor’s office has announced $10,000 rewards (each) in both cases in the last year.  Then there’s the (now reclassified) case of Jennifer Wix, 21, and her daughter, Adrianna Wix, 2, who were reported missing back on March 27, 2004. The Wix case was reclassified just this past Monday from a missing persons case to a homicide.

These murders have taken a terrible toll on the families and friends left behind, and the thought of their killers being out and about living free lives is a bit much to bare. This story is outside Robertson County but it goes to show that older cases are solved all the time, this case was just over in Hickman County which is on the other side of Nashville.  So I guess this is a message of hope to our Robertson County families and friends of victims, it can happen here too.

NASHVILLE- The Tennessee Bureau of Investigation and Hickman County Sheriff’s Office have solved the 12-year-old murder of Centerville resident Jeffrey Ola and today made arrests in the case after the Hickman County grand jury handed down a murder indictments.

Ola’s wife at the time of his murder, Lisa Ann Ola who is now Lisa Ann Showalter, age 53, of Lincoln, Nebraska, was indicted on one count of first degree murder. Her son, Andrew Scott Waddell, 32, who was Ola’s stepson at the time of the murder, was indicted on one count of first degree murder. Showalter was arrested today at the Nashville airport and booked into the Hickman County Jail on $250,000 bond. Waddell is currently serving a 15-year sentence in the Mississippi Department of Corrections for an armed robbery conviction in 2003 and was served with the murder charge today. He is scheduled to complete his sentence in 2017 and Tennessee authorities have placed a hold on him to face the murder charge. 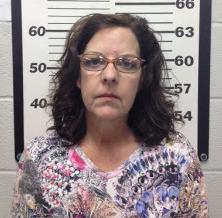 On January 6, 2001 at approximately 10:00 p.m., 35-year-old Jeffrey Ola was shot to death in his car in his driveway of his Centerville home. The victim reportedly left his residence at 9:30 p.m. and went to a Piggly Wiggly grocery store and then to a Sonic Drive-in restaurant and arrived home shortly before his murder. He was on his cell phone talking to his mother when he was shot several times. His mother heard him say he had been shot and was dying.

In May 2013, TBI and the Hickman County Sheriff’s office received new information about the case and revived the joint investigation which led investigators to conduct interviews and collect evidence in Oregon, Iowa, Nebraska, Texas and Mississippi.

“This case is an example of the persistence and perseverance of TBI agents and the Hickman County Sheriff’s Office. Law enforcement in Tennessee continues to investigate crimes no matter how long ago they occurred,” said TBI Director Mark Gwyn. “I am confident this case will have a successful prosecution and justice will be served for the victim’s family.”

Hickman County Sheriff Randal Ward said of today’s arrests, “This is a case that has been on my mind since I took office in 2002 when I became Sheriff. Within the last few months, we received some new information and with the hard work of my deputies and TBI, we were able to come to this conclusion. My heart goes out to the Ola family and I hope this arrest brings them some closure.”

The 21st Judicial District Attorney General‘s Office is handling the prosecution of the case.

All suspects are innocent until proven guilty by a court of law.