Despite the cold weather, high winds, and a hostile crowd……… 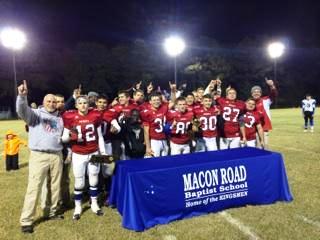 The game was a battle to the last second with South Haven holding off a last minute drive that ended with a game saving sack by Defensive End Chris Bradley. This game was full of outstanding plays by the Patriots.

Noah Edmondson, Clayton Wachter, and Chris Bradley were named TAASC “All State” and Tail Back Andrew Seaford named All State and State Playoff “Most Valuable Player” The Patriots Defense held Macon Road to only 2 first downs in the first half, led by outstanding play by Linebackers Noah Keeler and Caleb Miller.

Macon Road had no answer Offensively against the brutal front line play of Vincent Henry. The Offense was Led By Senior Quarterback Noah Edmondson that commanded a ground and pound strategy that moved the ball against a Macon Road Defense that is known for it’s size and discipline.

The Patriots commanded the clock and kept Macon Road on their heels for most of the game. The victory is South Havens first State Title and their 5th trip to the Championship in 7 years. With 80% of the Patriot Offense and Defense returning next season, South Haven is poised to make another Championship run next year and bring another Gold Trophy back to Springfield.