An accident involving a school bus and a pickup truck pulling a trailer in Bethpage has taken the life of 55-year-old David Trembly, of Scottsville, KY. Bethpage sits just east of White House and Portland in Sumner County.  The accident occurred around 2:30pm on Hwy 31E near Gifford Lane less than a mile after the bus left the school.

Kimberly Bellew Jepsen of Bethpage TN was home waiting for her son to arrive from Bethpage Elementary School.  Her son is just 10 and rides the bus. Around 2:25PM she received a text message from her son, “We got hit by a car” he said,  “My heart sank before logic could kick in, if he was texting me he must be OK but in the moment you just can’t think,” Mrs Jepsen said.

It was about 15 minutes before  Mrs Jepsen knew for sure her son was truly OK, it felt like an eternity she said. It was lucky her son had his phone with him today, he doesn’t always take it to school.

After the first text from her son,  Mrs Jepsen texted back,  “What? , Are you OK? Where are you?” Before telling her he was OK her son replied back “31E”. Mrs Jepsen again asks “Are you OK, Daddy is on his way”. Then finally her son replies,  “Yes” Mrs Jepsen, “Are you hurt anywhere?” Son, “No”. Mrs Jepsen, “Praise GOD” After that she went to the scene herself, her husband took the photos.  (ABOVE See screen-shot of their text conversation)

Mrs Jepsen said she knew the bus driver, “She’s a good bus driver” so that made her feel a little better. In addition to police, fire and EMS, the principal of the school and a teacher arrived at the accident scene to offer support and calm the students,” she said. 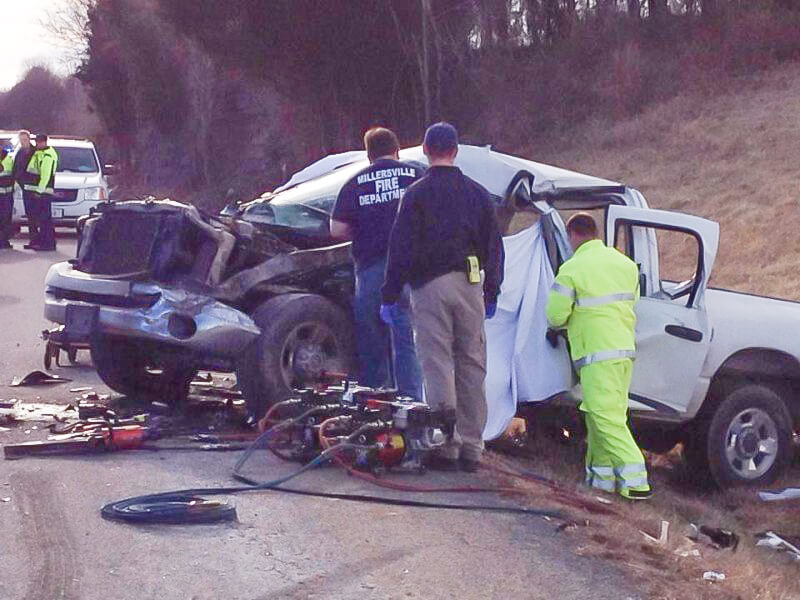 Mrs Jepsen also said the impact must have been pretty hard, both tires on the right rear side of the bus were flat. A woman waiting for her child and holding an infant were nudged by the open doors of the bus on impact and was knocked to the ground, fortunately both are OK. The bus was stopped at the time of the impact, lights on, stop sign was out, doors open.  What accident investigators are trying to understand now is why the driver of the truck hauling the trailer just couldn’t stop. It was a  rear-end type collision, the impact was on the right rear side of the bus.

Mrs Jepsen said she wasn’t sure if any of the children were hospitalized but at least one media outlet indicated that three students were, but only briefly with minor injuries. We were also told that the mother and infant that were knocked to the ground by the doors of the bus were also hospitalized but were expected to fully recover. The driver of the bus and the remaining students on-board were not seriously injured. There were approximately nine students on board at the time of the accident.

The Jepsen’s debated on whether to tell their son that a man lost his life in the accident. The Jepsen’s told Smokey that with all the publicity and likelihood that it would be all over school, that ultimately, it would be more appropriate for their son to hear it from them. The Jepsen’s sat down as a family and talked about it that evening, Mrs Jepsen said her son was very sad to hear the news.

Smokey would like to convey our deepest sympathy to the Trembly family in their time of great loss.