ROBERTSON COUNTY TENNESSEE: (Smokey Barn News)  – Special Agents from the Tennessee Bureau of Investigation have obtained indictments for a Trooper with the Tennessee Highway Patrol who has been accused of allegedly using excessive force during a November 2020 arrest at the Robertson County Jail in Springfield Tennessee.

On December 2nd, the Tennessee Highway Patrol reported the November 27th incident to 19th District Attorney General John Carney. General Carney subsequently requested a TBI investigation into the actions of the Trooper at the Robertson County Jail during the arrest of a man who crashed his truck after earlier fleeing troopers who attempted to stop him for speeding.

The investigation revealed that Trooper Sammy Allen, 33, of Davidson County, allegedly choked the arrestee twice and punched him in the groin once while he was handcuffed and restrained.

On Wednesday, the Robertson County Grand Jury returned indictments, charging Allen with two counts of Aggravated Assault and one count of Assault. This evening, Allen surrendered to authorities at the Robertson County Jail, where he was booked and released after posting a $15,000 bond. 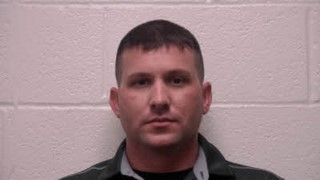