It was just this past Friday that Smokey broke the story of three men, all with guns, robbing a Springfield man in front of his own home.  Now police think these same men may have struck again, two more times. All of the alleged robberies have taken place within three days and within a 3 mile radius in Springfield. (See MAP)

These are not robberies of banks or businesses but ordinary citizens in front of their own homes. The first alleged robbery (as stated above) was last Friday June 6th around 11:00pm. The robbery took place in the 200 Block of 16th Ave E.,  between Main and Batts Blvd in Springfield. According to Springfield Police, three men (each armed with a gun) robbed a 57 year old man in his front yard in Springfield around 11PM Friday evening. According to a witness and the victim, a blue van or Caravan type of vehicle was driving up and down the street by their home.  They didn’t think much of the van until it stopped and three men wearing masks jumped out and robbed one of the men. (Full Story)

The next alleged robbery occurred two days later on Sunday June 8, at 6:50 PM.  Police officers were dispatched to the 1400 block of Westgate Drive, in Springfield, in reference to a robbery. A husband and wife reported that as they were getting their children out of their vehicle they were robbed by two men at gunpoint.  The victim’s stated that both suspects were armed with handguns and that the suspects took the man’s wallet and his wife’s purse. The couple and their children were not injured during the incident.

The third robbery also took place on Sunday June 8, just 4 hours later. Around 10:00pm on June 8th Springfield Police Officers were dispatched to the 4oo block of Laramie  in reference to a robbery. A man reported he was robbed by three men at gunpoint as he was walking from his driveway to his residence. The victim stated that the suspects took his wallet that contained a small amount of cash. The victim was not injured during the incident. 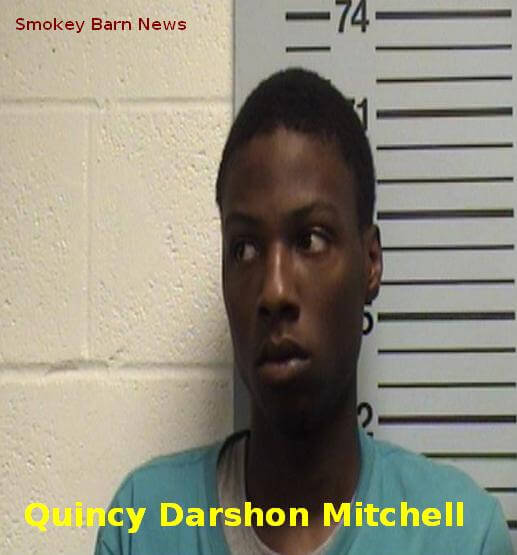 According to police, there could be as many as 4 suspects and they believe that all three robberies are connected. Police believe they may have identified one of the suspects in at least one of the robberies. The suspect is identified as Quincy Darshon Mitchell, 19. Mitchell was located and arrested on June 9th. Mitchell was charged with Aggravated Robbery and his bond was set at $15,000.00. Mitchell bonded out the same day.

Anyone with any information regarding these three robberies is encouraged to contact Springfield Police at 615-384-8422 or Crime Stoppers at 615-382-3799.  All information is anonymous and Crime stoppers will pay up to $1000.00 for information that leads to an arrest.