Smokey Barn News, September 23, 2013 Springfield TN – A car rear-ended a (Springfield High) bus full of students on 5th Avenue near Smith St (across the RC Animal Clinic) in Springfield around 3:50pm Monday afternoon. According to an eyewitness, two occupants fled the scene. One male ran up the hill while the female gathered a few things from the car. Police pursued them and a juvenile female is in custody.

The name of the driver has been released, it is Brandon Diggs 21 of White House. 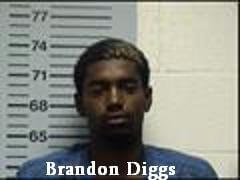 According to the police report Diggs borrowed the L200 Silver Saturn from a friend. After the accident the friend tried to report the vehicle stolen to White House Police. Diggs fled the scene and later turned himself into authorities in White House. Diggs faces several charges including, Driving On Revoked License, Leaving The Scene Of An Accident, Simple Possession Of Schedule VI (Marijuana), and Failure To Exercise Due Care While Driving.

As far as the cause of the accident, according to the report Diggs briefly looked away from the road at his phone when the impact occurred.

The female occupant (a minor) also fled the scene and was found by police minutes after the accident on Pitt Ave in Springfield and taken into custody, however she was later released to her parents and is not facing charges at this time though that could change according to police.

Diggs is currently being held without bond at the Robertson County Detention Center.

According to Robertson County Schools Communications Coordinator Jim Bellis, “We are glad that no one was injured and we appreciate the proactive response by Springfield police for the safety of the students” but offered no further comment on the matter.