OK, I guess you’ll need to pull that credit-card bill out of the trash and apologize to your in-laws, the world still seems to be here.

Is anyone really unhappy about it? I’ll bet a few commenters will say so, but most people seem to be OK with the continuation of “life as we know it”. Even if your life is wrought with disaster there’s always tomorrow. So guess what, tomorrow is here (again), or as they say, tomorrow is the first day of the rest of your life. Did anyone say that yesterday? 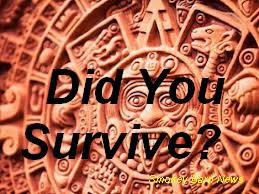 It occurs to me that (regardless of your position) the smart money would have been on the world NOT ending. Even if you were completely convinced the world WAS going to end, why not hedge your bets, get a loan and gamble everything you have. After all, who would be there to collect if you guessed it wrong anyways?

It seems that some kind of “end of the world” cataclysm comes along every few years that causes a rush on generators.  Perhaps generator ad execs are smarter than we thought. This one was different though, it was supposed to be the end of EVERYTHING, even though the Mayan’s never actually said the world would end on 12/21/12. So what do people buy for the end of “everything”? Apparently there was a serge in Noah’s Ark type survival pods and candle sales. I can understand survival pods (assuming the pod can handle the earth exploding and be good for several hundred years of space travel so you can search for a new planet to colonize) but candles? Perhaps they’re using them to light their survival pods. I wonder, did calendar sales dip at all.

So where does that leave us? Well, if you’re in the market for slightly used survival pods, candles, and generators your’re all set. Sometimes I wonder if the news industry doesn’t starts these “end of the world” stories to sell ads for used survival equipment? Wait, did I just  say that out loud?

At any rate, other than a spike in the birth rate next September it looks like we’re all here to stay. But wait, did you hear about NASA Engineer Dr Sal’s HAARP, alien, magnetic reversal, climatological “end of the world” prediction in 2016? YouTube Video–>