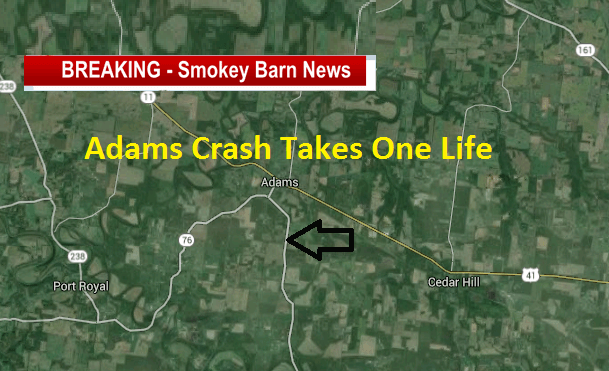 ADAMS TENNESSEE: (Smokey Barn News) – A tragic accident in the Adams/Cedar Hill area has taken the life of one and sent the other to Vanderbilt Medical Center in Nashville in critical condition after their vehicle left the roadway and overturned.

The accident occurred on Kinneys Rd/256 and Mud Cat Rd Saturday afternoon. The call came into 911 at 4:42 p.m. (Location of accident)

The Tennessee Highway Patrol is still reaching out to the victims’ families and have not officially released the identities of the two occupants in the vehicle. We did have a reporter at the scene and will be releasing more information after the THP confirms that direct family members have been notified.

What we can release is that both occupants are from Springfield. The driver, a male in his late twenties, was Lifelighted to Vanderbilt Medical Center in critical condition and his passenger, a female, in her mid to late twenties, was pronounced dead at the scene.

“We had a single vehicle multiple rollover wreck Saturday afternoon, the driver had to be extricated from the vehicle by the fire department and was air lifted to Vanderbilt Medical Center in Nashville with critical injuries. The female passenger was pronounced deceased at the scene. She will be transported to the forensic center in Nashville for an autopsy,” according to Robertson County EMS Assistant Director Russell Gupton.

As far as a cause of the accident, the Tennessee Highway Patrol is in charge of the investigation and they have yet to release their findings.

As soon as we can release more information we will bring it to you. Please do not reveal the names of the victims in comments.