RIDGETOP TENNESSEE: (Smokey Barn News) – Citizens of Ridgetop were greeted with a sign on the door stating that this evening’s 7 pm meeting, slated to discuss the budget and the police department had been canceled. The sign offered no explanation leaving the crowd to speculate.

Ridgetop Mayor Tony Reasoner told Smokey Barn News via text message that the decision to cancel the meeting came at the advice of the city’s attorney. This all in the wake of the city’s decision to close the police department which led to a judge’s decision to force the city to reopen it just days later. For the full history of what led to that decision, scroll down if you are viewing this story on Smokey’s main site.

Smokey Barn News was in attendance this evening and planned to run the meeting live. After the meeting was canceled Ridgetop’s (temporally reinstated) Police Chief Bryan Morris stepped aside to again talk with Smokey Barn News about the antithetical progression of his relationship with city leaders. 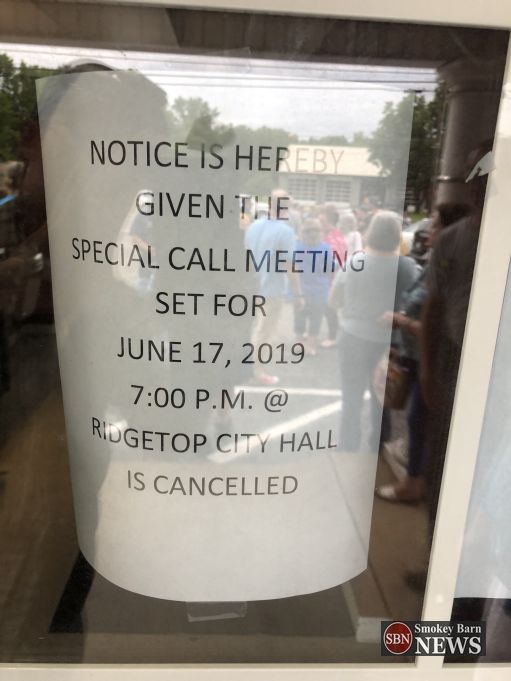 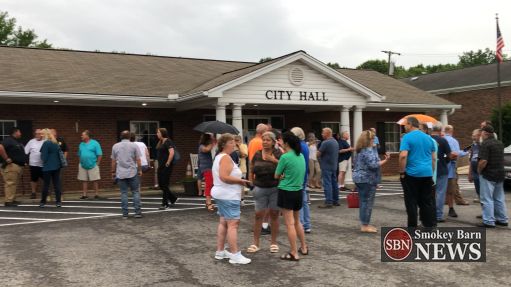 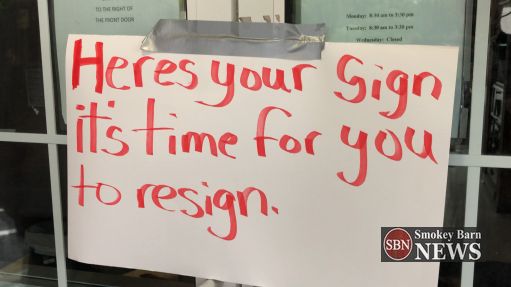 ROBERTSON COUNTY TENNESSEE: (Smokey Barn News) – After being closed by Ridgetop city officials earlier this week, the Ridgetop Police Department has reopened following a court order to hand the keys over to Police Chief Bryan Morris.

It has only been a few days since the city of Ridgetop completely dissolved its police department saying they can’t afford the department any longer.

The now-restored Police Chief Bryan Morris told Smokey Barn News on Monday that the decision came during a special called meeting Monday evening. The decision coming in at 7:15 pm.

After the meeting, Morris said he was told to take two police vehicles that were parked at city hall and return them to the station. Once at the station, Morris says a locksmith was already working on the locks.  “That’s very funny,” Morris said. “I mean if they haven’t talked about this (which would be breaking the sunshine laws) and they hadn’t already planned on doing this why was there already a locksmith changing the locks?”

Morris said he was told the special called meeting was posted but no one he knows was aware of the meeting. “They had the workshop which was posted, then immediately they had a special called meeting which lasted about 10 minutes and they voted to do away with the police department altogether,” Morris said. “It was Mark Johnson that made the motion to end the police department effective immediately,” according to Morris.

Chief Morris was in the meeting, he was told the reason for closing down the department was that the city could no longer afford the police force.

“It’s horrible, I think 100% there is money for a police department,” Morris said. “What they’ve done is take out the revenue for the tickets, they took that down to zero because they are throwing a fit because they got caught, you know, violating the ticket quota, so they put a zero on the revenue so now they’re saying they are $300 in the hole.

“Every city in the state of Tennessee that has a police department has a line item for revenue, every one of them and they don’t want to put anything there. They only have a hundred and twenty grand for the police department and they thought they could spend that money elsewhere better than to have a police department.  I think it’s a 100% retaliation against me, and everybody knows it,” Morris said.

On Monday Morris said Mayor, Tony Reasoner, told him, “If I could fire you I would fire you.” Morris told Smokey Barn News that he believes that the city’s elimination of the police department is an attempt to avoid a lawsuit. “I think it’s just a 100% retaliation,” Morris repeated.”

Once inside the station, Morris said he told Mayor Reasoner he had a large number of personal belongings in the building. “Morris said the Mayor told him, “Well, you call me tomorrow after 9 am and we’ll figure out a time for you to get it but you’re not allowed in the building without me.”

Morris said he removed his firearm and set it on his desk. “Is that unloaded,” Morris said the Mayor asked. Morris said he replied, “We don’t carry unloaded weapons. So I picked it up, unloaded it and laid it back down on the desk.” Morris said it was a tough moment. “You know, that department means the world to me. I kind of feel like we built that thing from the ground up. You see what kind of case closed rate we had. I was really proud of that and our training and everything else and it hurts, it hurts really bad.”

What hurts me worse is the citizens. I know for a fact how those citizens feel about us and just personal feelings with the mayor and the board disliking me so much that they’re willing to get rid of a whole police department and leave their own city unprotected just to get back at me. There’s hurt, there’s anger, you know, every emotion you can think of. It wasn’t that high paying of a job to begin with. The only thing that worries me is I have a pregnant wife. I don’t have a clue what’s going to happen with insurance, any of that stuff,” Morris said.

Smokey Barn News has reached out to Mayor Reasoner by thus far the only comment he has offered is, “I reckon will see what comes up July one.”

The decision to eliminate the police department fell in the wake of an investigation by District Attorney General Tom P. Thompson, Jr. over the legality of city leaders allegedly setting illegal ticket quotas for its police force.

The investigation was triggered by Ridgetop’s own police chief. MORE Ultimately the DA determined that no charges would be filed against the city or any of its leaders. MORE

As you can see in the video below, many citizens came out in the city’s last monthly meeting in support for the police department solely based on a rumor the city might disband it, Monday they did.

Now that a judge has ordered the department to be reopened, only time will tell what direction the city and its police department will take.