Springfield had their monthly Board of Mayor and Alderman meeting Tuesday evening.

One item on the agenda Tuesday night was whether or not to allow any kind of liquor in and around the Springfield Square. I’m going to insert here that there is some complexity to this story and I’m not a “political correspondent” but I’ll give it my best for you. Let me know if I leave anything or anyone out.

Some say allowing alcohol to be sold on the Springfield square will bring it back to life. People on the opposing side say you can’t have alcohol on the square because there are churches on the square and you can’t sell alcohol within 300 feet of a church. A few years ago that distance was shorter but it was increased to 300 feet to make sure that our churches, schools, daycare centers and playgrounds had some kind of a buffer zone. It’s not a crazy idea, most cities have some kind of rules pertaining to liquor sales. It comes from a desire to keep (at the very least) our children from the things one would generally associate with the sale of alcohol, like drunk people.

So that seems reasonable enough, however those on the other side believe that a reprieve of the rule in the downtown area (between 5th and 7th) would help revitalize historic old downtown Springfield. Smokey has spoken to people on both sides of the issue and one thing stands out, most people are either very strongly against it or very strongly for it, few seem to be hanging around in the middle. On the pro side the argument seems to be, “everyone else does it” and “It will revitalize downtown Springfield”.

With opponents, it’s generally a stance around keeping beer as far from churches as possible. The pros come back with “What is a church? can anyone just get together in any rented space they want and call themselves a church.?” Opponents reply with a resounding “Yes they can, a church is not a building, it’s people”….

Logically a person might conclude that the Springfield square is just a reflection of the RC Courthouse, the judges hang out there so it’s surrounded by attorney’s. If Springfield did approve liquor sales on the square and it became a hot spot, that would probably drive up real-estate prices on the square and eventually begin pushing out the attorneys. It would be nice to have the (already beautiful) downtown area around the courthouse become a fun dynamic place full of food and entertainment. But, however wonderful some think that might be, the fact is there are several churches on the square so that makes it a moot point, or does it?

Tonight the Board of Mayor and Alderman voted on whether to completely eliminate the rule between 5th and 7th around the courthouse or retain it. Because one alderman (Ann Schneider) was unable to attend tonight’s meeting that left 6 remaining and they deadlocked in a tie. A tie means that the ruling stays the same, no change is made.

To be clear, what they wanted was not a ruling to allow bars on every corner, it’s more of an attempt to attract restaurants that would be allowed to sell alcohol as long as 40% of their sales were food.

The strange thing is (remember I’m not a “political correspondent) as I understand it, as long as it’s properly inserted into the agenda they can bring it up for a vote every month. If that is true, it seems somewhat inevitable that alcohol will end up on the square. One thing is for sure, if all seven of the board show up next month (and they give it another go) with it teetering on the edge, any political smooshing in the meantime could pay off for one side or the other. 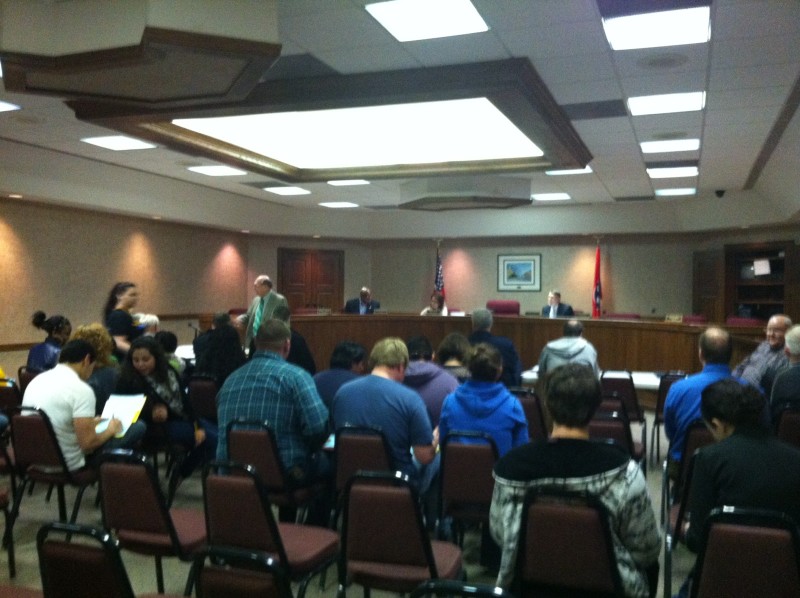 8-211. Minimum distance from church or school. Conditions under which
issuance of permit is prohibited are as follows:
(1) General. In the consideration of such application the city recorder
and/or the beer board shall take into consideration the proximity of schools
(public or private), daycares, parks, playgrounds, churches, and other places of
public gathering, and interference with public health, safety and morals.
No permit shall be issued to any person for a location which fails to
comply with any health ordinances or any regulation of the department of
health or which would violate any zoning and/or code ordinances of the city.Change 15, December 20, 2011 8-13
No beer permit shall be issued to any person for the conduct of any
business at any point or place in the corporate limits of the city unless such
place is zoned for, or authorized to be used for commercial or other purposes,
corresponding to the character of the business contemplated in this chapter.
(2) “On-premise” permit. No on-premises type permits shall be issued
authorizing the storage, sale, or manufacturing of beer within three hundred
feet (300′) of any school (public or private), daycare, park, playground or church
as measured on a straight line from the nearest point of the school (public or
private), daycare, park, playground, or church to the nearest point of the
building or structure where beer is stored, sold or manufactured, excepting that
this provision shall not be applicable to the renewal of any existing permit
outstanding as of September 19, 2006; and with the additional exception that
there shall be no distance requirement between a permit location and any
church that has been granted a conditional use permit within a CG, Commercial
General zoning district.
On-premise permits shall not be issued except to eating establishments
that possess seating capacities for not less than twenty-five (25) persons and
where hot meals or lunches are regularly served and where food revenues make
up at least forty percent (40%) of the gross sales of the business. The premises
must be regularly inspected by the State Health Department and have the
permit publicly displayed at all times. The premises must be equipped with
adequate toilet facilities and hand washing facilities, including hot and cold
running water, for use by customers.
This subsection shall not be applicable to qualifying entities who have
received a special occasion license under Tennessee Code Annotated, chapter 4,
title 57.