From Wednesday afternoon through late Saturday night 3 to 6 inches of rain is expected on top of already saturated grounds. While isolated flash flooding is not out of the question Wednesday night or this weekend, area rivers and streams are going to be on the rise starting Wednesday night. Those who experienced flooding this past week and are in this flood watch need to pay special attention to rainfall accumulations as flooding is expected to return to those locations. P

A flood watch means there is a potential for flooding based on current forecasts. You should monitor later forecasts and be alert for possible flood warnings. Those living in areas prone to flooding should be prepared to take action should flooding develop.

Widespread flooding possible as early as Wednesday afternoon and continuing into next weekend… .Two separate weather systems will bring moderate to heavy rainfall into middle tn this week. The first will be Wednesday and Thursday, and a second this weekend. Between the two systems, 3 to 6 inches of rainfall will be possible for areas within the watch, with the highest totals expected for counties closest to the TN river. With grounds already saturated and area rivers and streams in flux due to previous rains, both river flooding and flooding outside rivers will be a big concern throughout this week.

Temperatures will fall gradually to the 50’s as the rain moves in with showers lingering into Sunday morning. 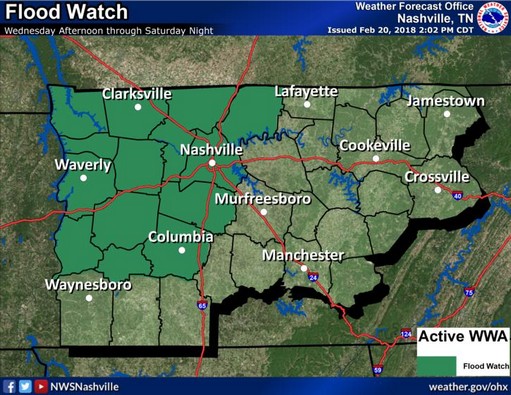