Grandma Got Run Over By A Donkey in Cross Plains Tonight

Following a report of an accident involving a donkey and a pickup truck Smokey went to E Robertson Rd & Rippy Rd in Cross Plains. The accident occurred around 6:15pm Saturday evening. We arrived at the scene to find a badly damaged pickup truck but the donkey had fled the scene. 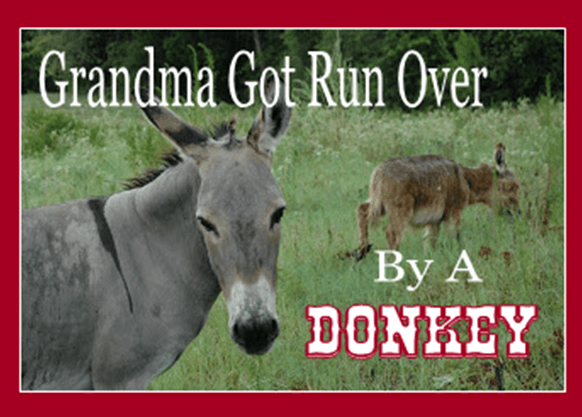 As we approached the driver she said “Grandma Got Run Over By A Donkey”. Luckily “grandma” was not injured, however the donkey may not have fared so well.

Be on the look out for an injured donkey near E Robertson Rd & Rippy Rd in Cross Plains tonight. The speed of the truck was about 45 miles per hour at the time of impact so it’s a sure bet the donkey is severely injured. Witnesses at the scene said there were actually 2 donkeys together. The driver said she closed her eyes at the moment of impact and the last thing she saw was the donkey’s head up on the hood of her truck. After that, she doesn’t know which way it went.