For the past several months Smokey Barn News has been tracking the possibility of a large distribution center coming to Coopertown. The project has been referred to as “Project Ally,” officials being tight lipped on the name of the firm until today. Coopertown Mayor Sam Childs told Smokey Barn News weeks ago that he has been working for years (since he was first elected into office) to bring a big project into that area.

Mayor Childs said that he had been pushing the property hard to shopping center developers but after realizing the size and scope of this project he realized that it will likely act as a catalyst to bring lots of commerce into Coopertown.

Referring to the project as “Project Ally” over the past few months, Childs told Smokey Barn News that according to drawings the new facility would be about a million square feet under roof.  “The equivalent of 22 football fields under one roof,” according to a release on Lowe’s website.  Childs said that hundreds of 18 wheelers a a week would move in and out of the facility and it would operate as a 24 hour a day three shift operation creating about 600 white and blue collar jobs.

Childs said the project will approach a half a billion dollars when it’s all said and done. “It’ll be the biggest thing that’s happened on the North side between Nashville and Clarksville,” Childs said.

Half Billion? “Yes, they’ll have to buy 110 acres of property, do wetland mitigation to get the site done. They’ve estimated the building at being about $75 million by itself. The equipment in it is going to be at least that much. Then they have to improve York Rd from Hwy 49 all the way up past the edge of their property. Then they have to put in water facilities, all the utilities, underground and on top. So when you start adding up all the real stuff they have to do up there the numbers start rolling up real quick.”

The location in Coopertown was one of several being considered by Lowe’s. We asked Mayor Childs what  the project would mean to the city of Coopertown. Childs said those 600 employees will need to live somewhere and he guesses that there will be a bit of a housing boom around the project making the area more favorable to commercial development. “We have about 400 acres up in there around this plant that could be easily developed,” Childs said. The water “Project Ally” would bring in would also make it easier to attract commercial development, Childs said weeks ago.

The location sits almost dead center between Clarksville and Nashville right off Interstate 24. Along with the surrounding cities and the large number of Robertson County residents commuting out of the county for work, Lowe’s should have no problem recruiting the talent needed to staff the large facility.

“It’s a really big thing, it’s a big deal for this area, I just cant over stress it. It’s really going to change our whole complexion. I saw the artist drawing, the building is going to be beautiful. Since it’s out where it is, Coopertown residents are not even going to know it’s there but they’re going to start recognizing the benefits from it.” Referring to the businesses that the new facility would likely attract Childs said, “They’ll be able go shopping some place fairly close, this is in the future of course, but this will be the magnet that will cause it to happen.”

The official announcement of the project occurred today in Coopertown. In attendance were the local city and state officials including Governor Bill Haslam. The announcement taking place at Coopertown Middle School since the weather made the site of the new facility impracticable. The land was formally owned by Dorothy and Milton Grief and incorporates over 109 acres that consists of farm land, fields and wetlands.

Just to clarify, this is not a Lowe’s retail store, Lowe’s is referring to the facility as a “direct fulfillment center.”  According to Lowe’s website, plans call for it to be operational by the third quarter of 2018, initially employing approximately 400 people and growing to 600 employees by 2022. One of the most technology driven and sophisticated operations the company has built, the center will ship parcel packages directly to Lowe’s customers and stores nationwide.

As part of the deal, Lowe’s will preserve a significant portion of the land (about 20 acres) as wetlands for the local ecosystem.

Lowe’s Companies, Inc., headquartered in Mooresville, North Carolina, is an American company that operates a chain of retail home improvement and appliance stores in the United States, Canada, and Mexico. According to Wikipedia Lowe’s has about 265,000 employees worldwide and in 2014 had a revenue of $56.22 billion. More about Lowe’s. 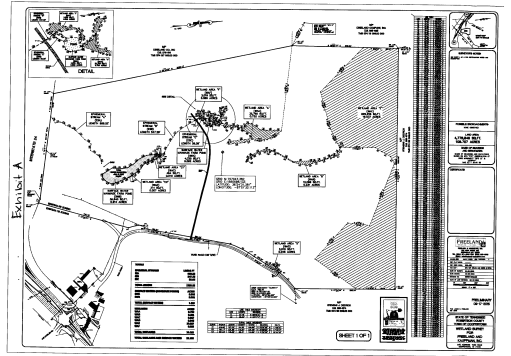