Since late November, there have been many burglaries in the eastern portion of Robertson County. One of these burglaries became a home invasion when the suspects came into a residence while the 77-year old homeowner was home. Nearly all of these incidents were solved on December 16th, according to the Robertson County Sheriff’s Department, when the investigation led detectives to three juvenile suspects. Two of the juvenile suspects attended a local high school, and the other is home schooled. 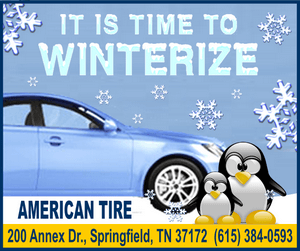 All three juveniles were arrested and are currently being held in a juvenile detention facility. As a result of the investigation, many stolen items were recovered including televisions, jewelry, guns, and wrapped Christmas presents. Two of the juveniles were charged with seven burglaries, and one juvenile was charged with four burglaries.

“The holiday season is one where we usually see an increase in thefts and burglaries,” said Chief Deputy Michael Van Dyke. “For victims that have been burglarized, it is a tragic and traumatic experience. They have had their home invaded, their possessions taken, and even gifts they’ve purchased for others in the spirit of Christmas stolen. So, to find the people responsible and return not only those items but some joy to these victims is a real Christmas story.”

“I am very proud of our staff for their hard work and solving these burglaries,” Van Dyke said.