According to our news partner WKRN News 2, at least one person died in the crash.

One person was killed in the crash while another was flown via LifeFlight to Vanderbilt University Medical Center in Nashville. Chief Anthony Heavner with the Portland Police Department said the second victim died from their injuries during the overnight hours, News 2 reports.

From what we understand, the crash occurred around 7:45 p.m. as the plane was heading to the airport. 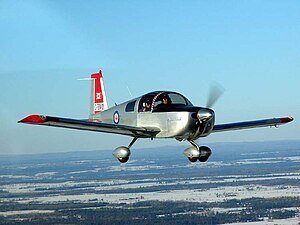 According to the FAA, the craft is a Grumman American AA-1B (pictured left) which is referred to as a trainer, according to Wikipedia. The crash occurred about 2,500 feet from the end of  Runway 1. MAP

At least one other person was seriously injured, according to Chief Anthony Heavner with the Portland Police Department.

The victims’ identities has not been released.

Both the Federal Aviation Administration and the National Transportation Safety Board have both been notified.  When a airplane crash is fatal the NTSB will lead the investigation and at some point the aircraft will most likely be transported to a secure facility for a more in-depth analysis.

After investigators recover “perishable evidence” this evening, the investigation will likely pause until morning.

As soon as more information becomes available we will bring it to you.