SPRINGFIELD TENNESSEE: (Smokey Barn News) A Springfield man was transported to Vanderbilt Medical Center in Nashville with a gunshot wound he received during a robbery Monday evening. The call came into 911 at 11:18 p.m..

Police say the 34 year old Hispanic victim was on the porch of a home on Laramie Dr using a cell phone when he was approached by two men with a gun. The victim either ran into the home or was forced into the home by the suspects.

Once inside the home the suspects took $20, a cell phone and car keys from the victim. At some point the victim was shot in the pelvic area. Before leaving , the suspects searched a vehicle parked in front of the home, police said..

Police say there were three other people asleep in the home at the time of the robbery.

One official told Smokey Barn News that criminals have been targeting the Hispanic community because they are less likely to report a crime and more likely to be carrying cash. Whatever the motive for the robberies it would seem that the robbers are losing their fear of shooting their victims.

Back on May 27th another Hispanic male was shot during a robbery on 5th Ave in Springfield. Like this case, the victim was on the porch of a home when the robbery took place. Police told us this evening that there were several robberies over the weekend all describing similar suspects.

(UPDATE) This robbery makes the 5th since Sunday morning.

On Sunday morning just before 2:00a.m. officers were dispatched to a home located on Pepper St in Springfield in reference to an armed robbery. Victims stated that they were approached by two black males with guns demanding money. The victims said they had .45 cal and a .22 cal pistols. Both were wearing black ski masks. The subjects took $55.00 and two 42” plasma tvs. The suspects then fled south on Pepper St.

Then about 20 minutes later at 2:11 p.m., officers were dispatched  to a home just one street over located on Childress St in Springfield in reference to another armed robbery. Upon arrival a victim said that two black males entered her home and pointed pistols at her children and forced everyone in the home to a rear bedroom. There they found the victims purse. They took it and ran out of the house  toward Richard St. The victim said both subjects had black bandanas covering their faces. 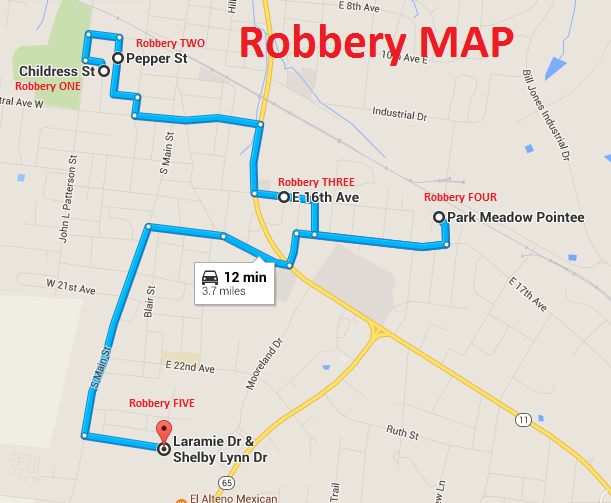 Then about ten minutes later,  around 2:30 p.m., officers were dispatched about a mile away to 16th Ave E in reference to a subject that was shot.  Upon arrival a Hispanic male had been shot in the arm and another Hispanic male had been robbed of $200.00 and a cellphone. One victim said the three black males kicked in their door and put him on the floor and held a gun to his head demanding money. The victim that was shot in the arm had tried to run away to his room and hide and was shot in the process.  After the robbery the three subjects ran out of the house and across the street toward 17th Ave E.

Later Sunday evening around 11:50 p.m. police were called to another home within the same vicinity about another robbery. This home, and the forth robbery to occur in the same day in Springfield, was located on Park Meadow Pointee. (See all four robbery locations on a map) The Hispanic victim told police he was on his porch texting and observed a vehicle driving by slowly.

The witness stated that minutes later three black males with guns approached him. They had their shirts off and were using them to conceal their faces, the victim told police.

“So far the only victims that have been shot resisted or ran. Don’t run, don’t resist. Money and property can be replaced, people can not,” Thompson said.

Chief Thompson said that his officers are working with other local agencies and putting in more hours. They are employing every possible law enforcement strategy (including some things he didn’t want to release to us) in order to capture these individuals.

According to Chief Thompson, the shooting victim from Monday night’s robbery is doing well and should fully recover.

Smokey will of course be following this story for you, as soon as police apprehend the suspects we will bring it to you.

Taco and Salsa Robbed At Gunpoint In Springfield