SPRINGFIELD TENNESSEE: (Smokey Barn News) –  A Springfield man is lucky to be alive, according to officials, after his vehicle left the roadway, slid down an embankment and crashed into a row of trees.

The vehicle, a 2000 Chevy S10 Blazer. was almost unrecognizable after the wreck which occurred just before 10:00pm Saturday evening.

The accident occurred on Kinneys Rd just outside of Springfield. (Exact location of wreck) 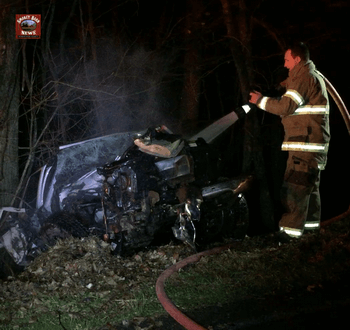 The impact was so severe that the hood of the vehicle landed on the other side of the roadway.

After the wreck, the vehicle was on fire and the driver was lying partially underneath it, according to Good Samaritan, Malcom Meadows of Springfield. Malcom and his wife Meghan were the first to arrive on the scene.

Malcom quickly pulled the driver out from under the vehicle, up the embankment and away from the vehicle while his wife Meghan called 911. Somehow the driver sustained only minor injuries and in fact declined medical treatment.

Officials told Smokey Barn News that the driver was likely ejected from the vehicle. After the wreck, leaves under the vehicle ignited, according to Fire Chief Chad Gregory with North Robertson Fire and Rescue.

According to the THP, the 31 year old driver was taken into custody under suspicion of DUI and transported to the Robertson County Detention facility in Springfield.

The THP released the following preliminary findings on the crash. “The vehicle was traveling East on Kinneys Road. The vehicle went off the right side of the roadway and struck a tree then burst into flames. The impact was so severe that the hood was found off the road”