SPRINGFIELD TENNESSEE: (Smokey Barn News) – Who hasn’t seen those funny commercials with the dancing guy tossing money at the camera. Well, it’s no joke, H&R Block is giving away $1,000, to a thousand people (per day) for 32 days, a combined total of a whopping 32 million dollars.. 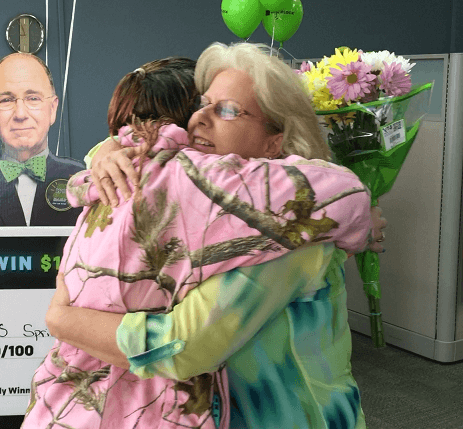 Misty Yates of Springfield had her taxes done at H&R Block and thought little about the contest, that is until she received an email this week that said “You won!” She didn’t believe it at first, so she called H&R Block to see if it was real.

When H&R Block representative Alice Bilyeu answered the phone and screamed “you won!, you won!” Misty began to believe.

Smokey Barn News was there when Yates, who is a mother of seven, picked up her $1000 check. She was, needless to say, elated. According to Bilyeu, Yates was one of the first (perhaps the first) to win in the middle Tennessee area. Bilyeu told Smokey Barn News there’s still plenty of time to enter the contest, all you have to do is let H&R Block do your taxes and you too could get an email that says “you won.”

Bilyeu said if you have already had your taxes done this year, her Springfield office (located in Springfield at 2104-D Memorial Blvd) can look back at three years of tax returns to see if you received all the deductions you are entitled to. “Just give me a call,” Bilyeu said.