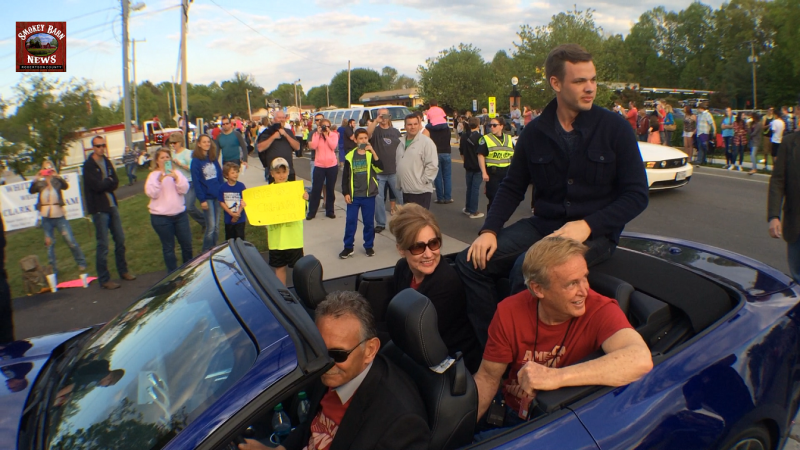 The Guitar That Changed Clark Beckham:

ROBERTSON COUNTY TENNESSEE: (Smokey Barn News) – If you are an American Idol fan then you probably already know the name Clark Beckham. If so, then you also know that Clark just made it into the top three Wednesday night.  Needless to say, his parents Terri and Virgil Beckham are beside themselves with joy over their son’s success. On Thursday, Smokey reached out to mom and dad while they were still absorbing Clark’s progression into the top three.

“Top 3! My heart is full of affection and gratitude for the White House community and Nashville for the incredible hometown visit you gave to Clark last Friday. He’d had a couple of tough weeks on the show when he came home last week, and I have no doubt that your love and support refreshed and invigorated him, filled him with confidence and a fire to bring the title of ‘American Idol’ home.

“I saw a difference in Clark’s performances Wednesday night, an ease and sense of peace, I guess, that I hadn’t seen before. I attribute it directly to how warm and enthusiastically he was received at home. I’ve said before that I love people who love my kid, and after the parade and concert, I realize that I love a lot of people I’ve never
met! From the bottom of my heart I thank the people of White House and Nashville for being there for Clark. There’s just a week to go, so please vote!”  Terri Clark Beckham

“I guess to sum it up for those that watched the show on Wednesday and saw how verklempt (very emotional) I was seeing our home town embrace Clark the way they did; that pretty much sums it up. I was so touched and so moved, and I know Clark was too. Just seeing the amazing support that Clark received from the town and the city that helped create the man that he has become was overwhelming. That helped me realize what a large part that (White House) actually played in his development.

“A lot of people have praised Teri (Clark’s mom) and me for raising such a fine young man but White House and Nashville have played a huge roll in who Clark has become too.  They can take pride in whatever Clark achieves in his life and career from this point forward because they had a hand in it.

“Early on when Clark started playing on the streets in Nashville a slightly disheveled looking homeless man approached Clark and said, in effect, ‘You’re not going to get anyone’s attention doing that, here, let me show you.’ Clark told me he was a little hesitant to hand over his guitar. Clark didn’t know for sure if the guy was just going to run off with the guitar but he handed it over anyway. This homeless man took Clark’s guitar and started singing very forcefully and very expressively you might say. All the sudden people started noticing and putting money down.

“Of course Clark gave the man all the money but he was curious, why wasn’t this guy singing on the streets himself, so Clark asked, ‘Why are you not doing this, you’er really good at it.’ The guy says ‘Well, somebody stole my guitar and I’m out here on the street doing the best I can.’

“The encounter with the homeless man was another thing that pointed Clark to the Nashville rescue mission which he’s now sponsoring and supporting. All the proceeds from his t-shirts and everything go towards the mission.

“After Clark’s encounter  with the homeless man he called me and asked about a guitar we had, Clark wanted to give the guitar to the homeless man.  I said, “Sure but it doesn’t have a case.” Virgil tells Smokey that Clark came and got the guitar and bought a new case for it.  With guitar and case in-hand, Clark went looking for his new friend but to this day Clark never saw the man again.”

Smokey Barn News asked Virgil if he felt the homeless man had any affect on Clark’s performances on American Idol. “Absolutely, absolutely,” replied Virgil. Smokey: “So that guy somehow touched your son.” Virgil: “Without a doubt, in fact Clark told me that was the moment when he learned that, well basically, you got to put on a show.”

“One of the advantages of being old is you can look back and  see God weaving this amazing tapestry, you can see how God uses us all to touch one another,” Virgil said.

Oh, and by the way, Clark’s dad also wanted us to pass on this message, “Vote for my son!”

Smokey was there as Clark arrived for his White House homecoming and captured it for you as well as the parade and concert.