According to officials at the scene, no serious injuries were reported and no one was transported.

For reasons unknown at this time, the driver of the red vehicle ended up on the wrong side of the road going the wrong way. Two other vehicles going the opposite direction collided with the vehicle head-on, one rear-ending the other.

The driver of the Porsche told Smokey Barn News, “I just saw the guy coming down the road and thought he was going to get his mail or pull in here (pointing to a driveway) but they didn’t. I tried to go around because it looked like there was going to be a head-on collision, before I could….. there he was.” 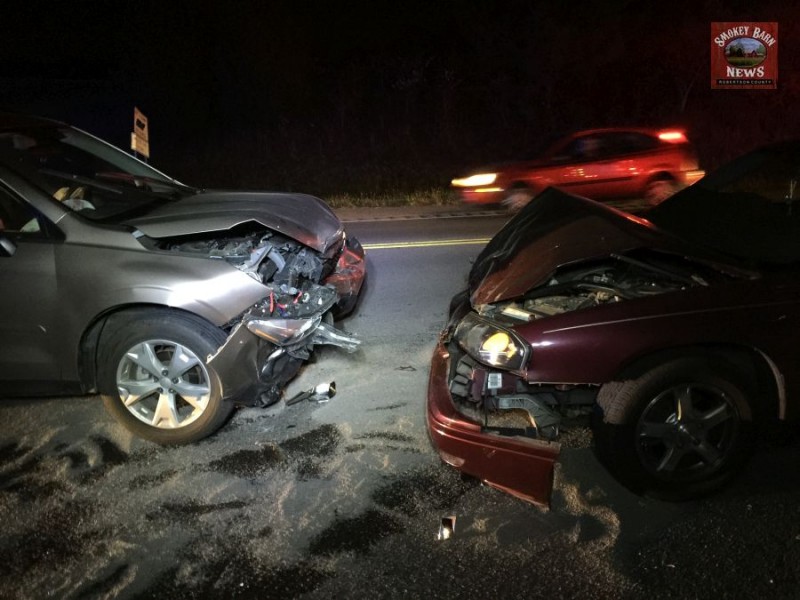 According to the driver of the minivan, “Someone in front of me dodged him, and then (of course) when that happened it was like, Oh, and there it was right in front of me.”

According to witnesses, the driver was an older gentleman with a very young child in the back seat.

According to officials, drugs or alcohol did not seem to be a factor.

The accident occurred just before 7:00 p.m. and was cleared in about an hour.

According to one official, “It could have been a lot worse.”

As far as a cause of the accident, it is still under investigation by the THP.  As soon as they release their findings we will bring it to you. Refresh this page for updates,

A local off-duty firefighter came up on the accident almost immediately after it occurred and was able to quickly assess the situation and provide support until emergency medical services could arrive.