UPDATE: The family has also set up a GoFundMe for all the medical bills,  CLICK HERE TO DONATE.

PORTLAND TENNESSEE: (Smokey Barn News) – Three people were transported to area hospitals Monday (two critical, one stable) after they were reportedly stabbed at a Portland home off N. Pinson Rd near the Kentucky border.

According to Orlinda Fire Chief Dusty Johnson, when he arrived, a family member indicated that it was a home invasion and that the suspect just started cutting.

According to Chief Johnson, the Robertson County Sheriff’s Office indicated that they already had someone in custody when he arrived. 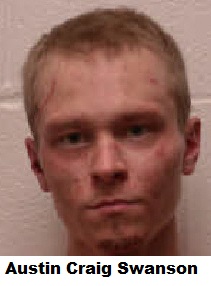 According to Chief Johnson, all three were conscious as Robertson County EMS, with medical assistance from both the Cross Plains and Orlinda Fire Departments’ stabilized the victims for transport.

“There was a lot of blood loss,” Chief Johnson told Smokey Barn News. “All three had multiple lacerations.”

The identity of the suspect, now identified as 23-year-old Austin Craig Swanson, was still in the residence when Deputies arrived and was taken into custody. Deputies immediately performed life-saving first-aid on the victims until medical personnel arrived.

Swanson was transported to the Robertson County Detention Facility in Springfield, without bond. He has been charged with four counts of First Degree Attempted Murder.

The Robertson County Sheriff’s Office is leading the investigation and they have confirmed that the 23-year-old female was in fact pregnant. According to the Sheriff’s Office, Swanson is a neighbor of the victims. A motive for the attack remains unclear.