CONFIRMED: Dalya Qualls; Public Information Officer for the THP has confirmed that a second person has died. The official report has not been released but it will be forwarded to us as soon as it becomes available.

Two people have died this afternoon in a tragic wreck involving a tractor-trailer and a Nissan XGX. The wreck occurred around 3:00 PM Friday afternoon. There were 3 occupants in the car, according to R.L. Douglas, Robertson County EMA Director. Two occupants were transported to a trauma unit. We don’t know when the second occupant died but it must have been either in transit or at the hospital. The car was so badly damaged that identification of the make and model was problematic. The driver of the semi was not injured.. The cause of the wreck is unclear at this time and remains under investigation by the Tennessee Highway Patrol.

The semi spilled about 150 gallons of diesel fuel in the field so a special team is on its way to the scene to clean it up, according to Douglas.

Names are being withheld pending notification of next of kin. According to a witness the car has Sumner County tags.

Expect 49 to be closed or very slow for some time as crews work to clean up the area and investigators work the scene. Location of crash:

The driver of the tractor-trailer Tommy L Johnston age 43 was not injured.

The THP report indicates that the Nissan heading North on 49 crossed the center line causing a head-on collision. 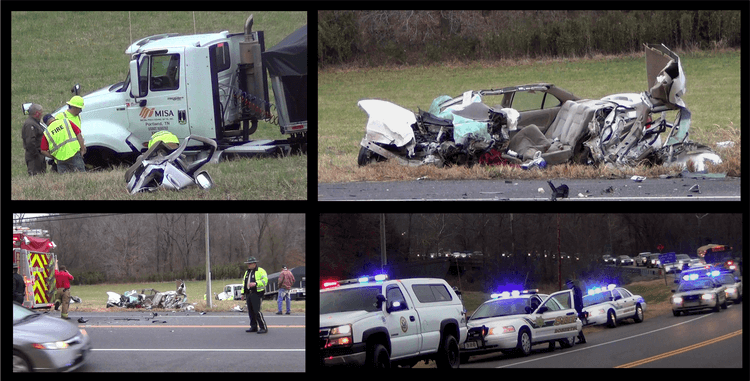