Your vote will help keep an Experienced, Honest & Ethical Member in your local government, representing YOU, rather than the Special Interests!

As your Alderman I will again push for the passage of some common sense issues with the new members on the board previously voted down.

1. Require any major spending must also have attached the source of funding to cover the loan payments. I do not want any more “we need a tax increase to cover
the requirements a year or two down the road when ”what we hoped for did not work out” or we take again from for example the road repair budget.

2. Change the traffic signals on most of Memorial Blvd. and some side streets to flash yellow on main route and red on side route.

3. After a series of employee morale killing hiring in the back door of some higher paying jobs, demand action and policies to close the loop hole and adopt a 3rd
party ethics hotline for employees.

4. Establish a kiosk for the public to review public records to stop being asked why they want the information.

5. Reverse the passage of allowing venders and others to give gifts to employees and elected Aldermen.

6. Prohibit editing and destruction of the video the public sees on cable channel 3. Yes, it is done when something happens they don’t want you to see.

7. Cancel the tax dollars going to a 501c non profit that have grown the payroll of their organization in the last 10 years from about $80,000 a year to almost
$400,000 and growing while also giving bonuses without merit.

8. Between South Main Street at 22nd Ave. to Hwy. 49 at WDBL Radio station on farm land offered as a donation, finally build out a road to connect Tom Austin Hwy.
from Pizza Hut to Hwy. 49. A plan on the list for decades but never funded. Reserve enough land to bring all city departments to one central location to reduce
waste, duplicate jobs, and competition for new facilities by individual departments as they grow and expand. 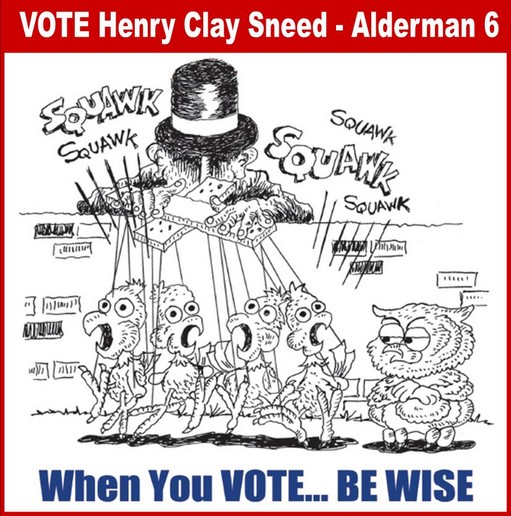 • Elected Vice Chairman & Treasurer of Railroad Union, Nashville – 8 years. My co-workers have entrusted me as treasurer with their money. So can you!

• Many past family members served in local & state gov’t

Paid for by the Committee to Re-Elect Henry Clay Sneed; Clay Sneed, Treasurer