After an investigation into the situation involving (as a previous press release stated) “alleged behavior at a Gatlinburg hotel while chaperoning students.” by Springfield High School Agriculture Teacher (Jared Phy) back on March 28,  the Robertson County School system has released the following letter (below). The letter states that Robertson County Schools “requested, received and accepted the resignation” of Jared Phy.  For the full story scroll down. This is the second teacher to “resign” within the last two months in the Roberson County school system. Back on April 5th Smokey broke the story on another teacher that resigned, also over alleged behavior issues. For more on that story click here.

Robertson County Schools has requested, received and accepted the resignation of Springfield High School Agriculture Teacher Jared Phy effective immediately as of Tuesday, April 9. The decision was reached as a result of Phy’s reported conduct while chaperoning SHS Future Farmers of America students on a convention trip to Gatlinburg in early March.

Phy’s classroom responsibilities will continue to be covered by a certified teacher until the end of the year. A full-time replacement will fill the position beginning next fall. 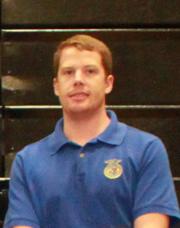 room in Gatlinburg around 4AM Tuesday morning due noise complaints by other guests.

Let’s remember that (though Jared Phy has been placed on unpaid leave) the accusations against him are alleged. There will be an investigation (presumably by the school board) that will look at all the facts and make a decision as to Phy’s disposition as a member of the Springfield High School faculty.

Jared Phy is  the adviser for  Springfield High School’s FFA group according to their website.  He along with a parent (we believe) of one of the students were  acting as chaperones for ten students attending a state FFA convention. According to the state FFA website the convention ran from March 24-27.

The short of it is that the teacher (Jared Phy, agriculture teacher in his first

year at Springfield High School) and the other chaperone were allegedly making noise in a room at the  Glenstone Lodge Hotel. Apparently several complaints by other guests were made and Police were called. Police determined that both Phy and the other chaperone may have been drinking, the letter (below) from the school board states.

Neither Phy or the other chaperone were arrested as we understand it and the school quickly dispatched two new chaperones.

Below is a letter from the Robertson County Schools  Communications Coordinator Jim Bellis addressing the situation in a press release this afternoon.

Springfield High School Agriculture teacher Jared Phy has been placed on unpaid leave pending the outcome of an investigation into alleged behavior at a Gatlinburg hotel while chaperoning students.

Phy was responsible for 10 students at an FFA Convention in Gatlinburg. Police reports say that officers were dispatched just before 4 a.m. to a noise complaint in an area hotel room occupied by Phy. There they found Phy and a female chaperone, who were both intoxicated.

Phy’s Principal, Justin Grimes, was notified and a RCS supervisor and a Springfield High School assistant principal were sent to Gatlinburg where they assumed responsibility for the student group.

The students were able to complete their convention attendance without incident and will return to Springfield on Thursday.