ROBERTSON COUNTY TENNESSEE: (Smokey Barn News) –The Portland Police Department has been getting numerous calls regarding birds injured all over the city. Purportedly, Eastern Robertson County and Gallatin have also had the same problem.

According to a wildlife biologist,  the birds are Loons. The Loons are migrating through our area and are mistaking the wet paved streets as water and attempting to land. The loons are not diseased. They are being injured when they strike the pavement.

Smokey Barn News reached out to Walden’s Puddle. Funded by donations, they provide care and treatment for sick, injured and orphaned native Tennessee wildlife.  They tell us that because the birds are in migration they are looking for a place to rest. The storm has made the blacktop streets and parking lots look like water so the birds are essentially crash landing and in some cases injuring themselves.

According to Director of Animal Care Elisa Fosco at Walden’s Puddle Wildlife Center of Greater Nashville, Loons cannot take off from land, they must take off from the water. Fosco tells Smokey barn News that they have received 7 Loons in just the last two hours. She recommends that if you find a Loon on in the grass and it appears to be in good shape, it’s all right to try and move the bird to water if you can safely. However, if the bird appears to be injured or if it has been flailing around on the asphalt for very long, box up the bird and bring it to Walden’s Puddle. They will not come to you. Fosco says if you have any doubt, feel free to bring the bird in and they will be happy to give the bird the once over and get it relaunched.

The staff at Walden’s Puddle will clean off any road-oil, check the bird’s waterproofing and give it a checkup. The goal is to get the bird relaunched as soon as possible. If the bird needs more time they will care for it and release it in a week or two. There is still a few weeks left in the migratory window so the birds should be OK.

If you find a wild animal that is orphaned or injured, you can call their Wildlife Admissions Line for information. (615) 299-9938. 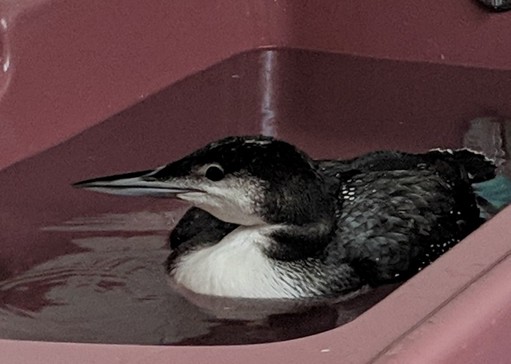