CROSS PLAINS TENNESSEE: (Smokey Barn News) – According to a recently released report from the Tennessee Highway Patrol, two drivers are facing misdemeanor charges of reckless endangerment of a child in the wake of a rollover crash over the weekend.

According to the Tennessee Highway Patrol who is leading the investigation, a 1994 Chevrolet truck driven by Coty Ogg, 25, of Springfield and a 1997 Ford Explorer Driven by James Bunch, 22, of Lebanon, TN were both traveling west on Hwy 25 just outside Cross Plains, when, according to the THP, the Ford Explorer made an attempt to stop the truck and ran off the road and into a soy field.  After traveling some 500 feet off the road, the Explorer came back up onto 25. Then the truck and explorer hit, right rear to left front. The impact sent the truck out of control and into a rollover crash. The truck landed upside down in a ditch with two very young children on board.

The THP concluded that “No defensive action was taken to prevent contact and both drivers knew children were present.”

Evidence at the scene suggested that the children may have been properly restrained, however, both drivers were not, according to the report. There was also no mention that drugs or alcohol were a factor in the crash.

Officials at the scene told Smokey Barn News that Bunch stopped after the crash and helped the family out of the overturned vehicle. Somehow everyone escaped the crash without serious injuries and no one was transported.

Officials at the scene told Smokey Barn News that the incident was not a random act and both men new each other.

Both drivers were taken into custody by the Tennesse Highway Patrol and transported to the Robertson County Detention Facility in Springfield. Both facing charges of Reckless Endangerment. Coty Ogg’s bond was set at $3000,  James Bunch’s bond was set at $4000. Both men have since bonded out of jail. 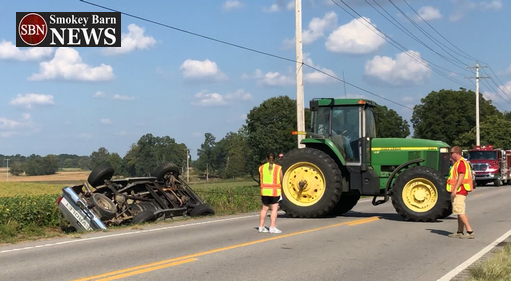